Salman Khan, Iulia Vantur Take Over The Beaches Of Maldives 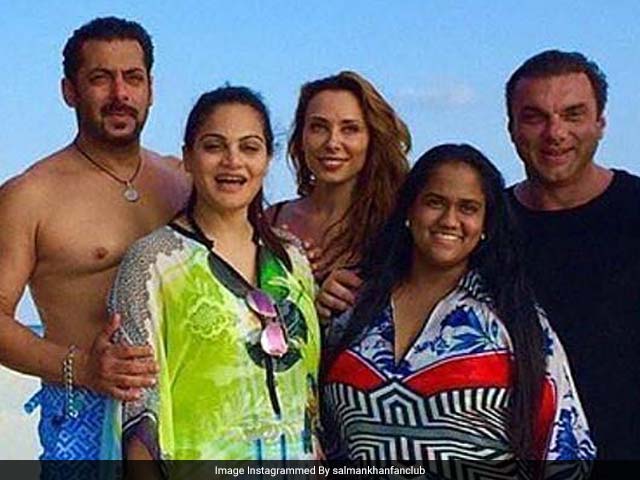 New Delhi: Salman Khan finally joins his nephew Ahil for his first birthday celebrations in Maldives. In a picture which is being shared on social media, Salman poses with brothers Arbaaz and Sohail, sisters Alvira and Arpita and his brother-in-laws Atul Agnihotri and Aayush Sharma, and also Iulia Vantur. The Romanian actress and model, who is reported to have been dating the superstar for a while now, was not spotted in the previous pics shared by the other members of khan-daan earlier. Salman had to miss nephew Ahil's first birthday party as he was busy shooting for his new film Tiger Zinda Hai in Austria.

Party starter Salman Khan and crew were beach-ready and could not look happier:

Ahil is truly the rockstar of Salman Khan's family and successfully brought everyone together for his birthday bash in the beach location. The celebrations were accompanied by cake, firecrackers and more of Ahil's admirers like Arbaaz's estranged wife Malaika Arora, her sister Amrita Arora and husband Shakeel Ladak, Sohail's wife Seema and the younger members of the family.

Here wishing my love,mylife,my world,my lil man who's given me a reason to believe in love, life and togetherness forever. Thank you for teaching me, so many meanings of words I used and I dint understand, thank you for giving life to me , thank you for filling every void I had thank u for being u !Love u Ahil ! #ahilturns1 @amillafushi

Iulia Vantur has frequently been spotted at Salman Khan's family gathering such as get-togethers, festivals and birthdays. Last year, it was reported that Iulia was allegedly offended by Salman's apparent refusal to commit but these appeared to be just rumours when Iulia showed up at Sohail Khan's elder son Nirvaan's birthday party in December.

Promoted
Listen to the latest songs, only on JioSaavn.com
Meanwhile, Salman has just completed one leg of his shooting schedule for Tiger Zinda Hai, which is a sequel to his 2012 film Ek Tha Tiger, co-starring Katrina Kaif. Salman Khan will next be seen in Kabir Khan-directed Tubelight, which also features Chinese actress Zhu Zhu.

Arpita and Aayush married in November 2014 and Ahil is their first child.