Salman Khan Hearts Katrina Kaif? That's What The Internet Thinks. All Because Of A Mug (Just One) Of Coffee 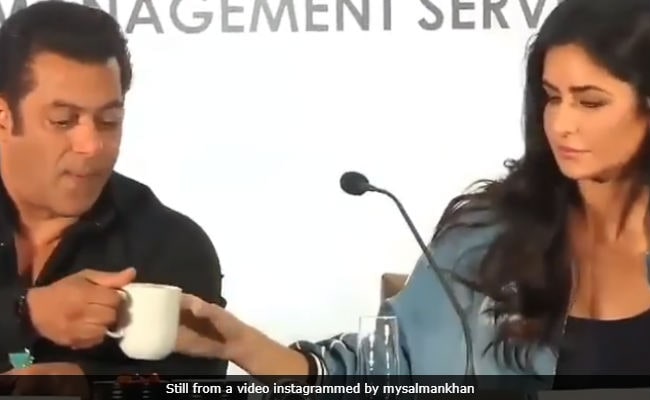 New Delhi: A video of Salman Khan and Katrina Kaif sharing coffee from the same mug at a press conference in Pune is going viral. "Couple goals," exclaimed excited fans, who are still rooting for 'Salman hearts Katrina.' Several fan clubs shared the short snippet from the press conference, which took place during their Da-Bangg tour in Pune over the weekend. Sonakshi Sinha, who was also a part of Salman Khan's entourage, was speaking to the media while Salman and Katrina exchanged side notes and sipped the coffee. "Cutest couple in Bollywood," declared one fan in the comments section while another added: "World's best Jodi. Several similar comments flooded the comments thread.

Watch the video which has driven the Internet crazy:

Prabhu Deva, Sohail Khan and Daisy Shah were also a part of the Pune Da-Bangg Tour team. From the pictures of the event circulating on social media, it appears that Sonakshi paired with Prabhu Deva for a dance performance - they've danced together to Go Go Govinda in OMG! Oh My God. Salman Khan performed with Katrina Kaif, who looked fabulous dressed in bridal red. Salman and Katrina recently co-starred in Tiger Zinda Hai. Salman Khan also apparently sang live for the audience. He has earlier covered Mika's 440 Volt (from Sultan) and sang Main Hoon Hero for Suraj Pancholi and Athiya Shetty's Hero.

Here are glimpses from the Da-Bangg: