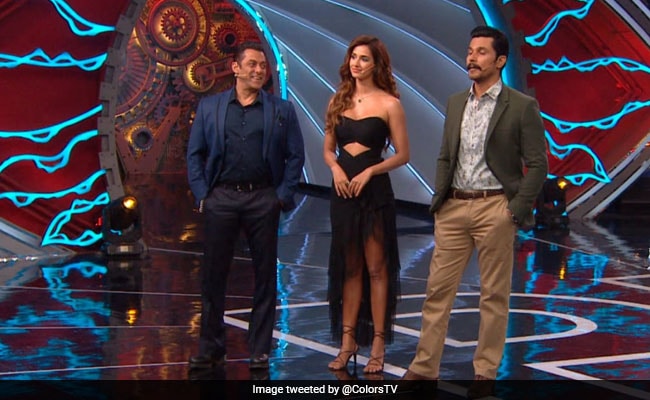 Salman Khan, who hosts the current season of the popular TV reality show Bigg Boss 14, had two special guests on the sets on the Weekend Ka Vaar episode on Saturday - his Radhe Your Most Wanted Bhai co-stars Disha Patani and Randeep Hooda. The actors were there for the promotions of their forthcoming film, which is slated to hit the screens on Eid (in May). During the episode, Disha Patani, who has shared screen space with Salman Khan in the 2019 film Bharat, shared her experience of working with the actor and she said that she was "intimidated" at first but she had a great time working with Prahu Deva, Salman and Randeep. Disha and Salman were seen dancing to their hit song Slow Motion and Randeep Hooda joined them.

See the pictures from the Radhe promotions on Bigg Boss 14 here:

Last month, Salman Khan revealed that the film will have a theatrical release on Eid this year. In his statement, Salman Khan wrote: "Sorry it has taken me a long time to revert to all the theatre owners. It's a big decision to make during these times. I understand the financial problems that theatre owners/exhibitors are going through and I would like to help them by releasing Radhe in theatres. In return, I would expect them to take utmost amount of care and precautions for the audience who would come to the theatre to watch Radhe. The commitment was of Eid and it will be Eid 2021."

Radhe: Your Most Wanted Bhai will see Prabhu Deva sporting the director's hat. It will be Salman and Prabhu Deva's third collaborative project after Dabangg 3 and Wanted. Radhe also stars Jackie Shroff.