Salman Khan And Shilpa Shetty's 'Dosti Ka Dum' Summed Up In One Pic. Seen Yet ? 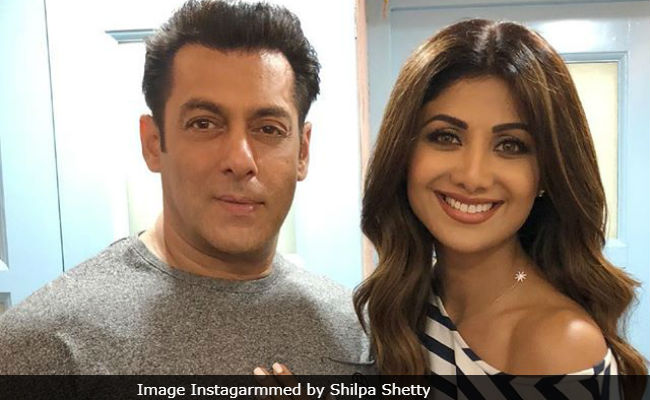 "Some things never change," this is how Shilpa Shetty described her bond with Salman Khan, in her latest Instagram post. On Monday, Shilpa treated her fans with a million-dollar picture featuring Salman Khan and wrote: "23 years of friendship.. Somethings never change. Dosti Ka Dum still as mad as ever." Shilpa also used hashtags such as "#unconditionalfriendship," and "manylaughs." The picture was taken on the sets of the TV show Dus Ka Dum, which is hosted by Salman Khan. Needless to say, the picture has over 2 lakh likes on Instagram. Shilpa Shetty and Salman Khan have co-starred in several films including Garv: Pride And Honour, Shaadi Kar Ke Phas Gaya Yaar, Phir Milenge and Auzaar.

Apart from Shilpa Shetty, renowned choreographer Farah Khan also shared a photograph from the sets of the show, in which the trio can be seen smiling at the camera. Farah wrote, "About last night!! You don't mind landing the same day and then shooting till midnight when it's with these two (Salman Khan and Shilpa Shetty) we had a mad time."

About last night!! U don't mind landing the same day n then shooting til midnight ehn its with these 2.. @beingsalmankhan @theshilpashetty we had a maddddd time #Dus ka Dum @sonytvofficial

Shilpa Shetty has been associated with several reality shows. After winning the British reality show Celebrity Big Brother 5, Shilpa hosted the Indian version of the show titled Bigg Boss (which is now hosted by Salman Khan). Shilpa Shetty has also appeared as a judge on several shows including Jhalak Dikhhla Jaa,Nach Baliye and Super Dancer.

Shilpa Shetty is best-known for her performances in films such as Baazigar, Dhadkan and Life In A... Metro among others.