Salman Khan, Accused Of Poaching, Launched A Wildlife Book. The Irony Of It

Salman Khan was at the book launch at the behest of Bina Kak, a friend of the family and former minister of tourism in the Rajasthan cabinet 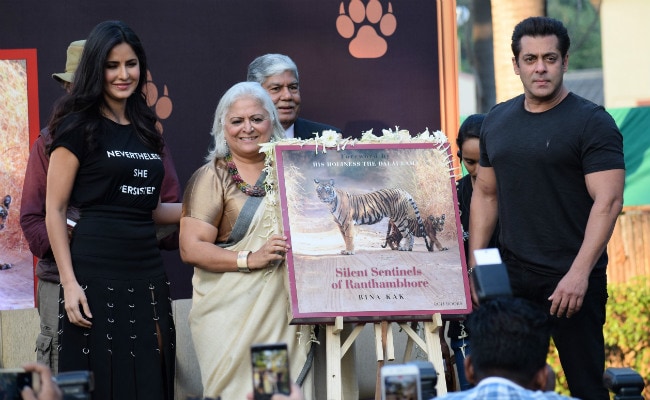 New Delhi: The irony of having Salman Khan preside at a wildlife-related event has escaped nobody, not least Salman himself. While launching a photo-book titled 'Silent Sentinels Of Ranthambhore' in Mumbai on Wednesday, the 52-year-old actor said, "The less I talk about this topic, the better it is." Salman is accused of illegally hunting endangered blackbuck and chinkara deer while filming Hum Saath Saath Hain in Rajasthan in 1998. He has faced four separate cases in connection to this, three of which he has been acquitted in.

Salman Khan was at the book launch at the behest of Bina Kak, a friend of the family and former minister of tourism and environment in the Rajasthan cabinet. Salman's Tiger Zinda Hai co-star Katrina Kaif was also at the book launch as were his father Salim Khan and stepmother Helen.

The Rajasthan High Court acquitted Salman Khan in two cases of poaching last year. Early this year, he was also let off in an Arms Act case connected to poaching. In January, he told a Jodhpur court that he was innocent in the fourth poaching - his Hum Saath Saath Hain co-stars Saif Ali Khan, Tabu, Neelam and Sonali Bendre are accused of instigating him in the alleged illegal deer hunt.

Twitter also thinks it beyond ironical that Salman would be asked to do the honours at an event celebrating wildlife:

In other news, Salman Khan was invited for a book luanch. Book on wildlife.

Promoted
Listen to the latest songs, only on JioSaavn.com
At the book launch, Salman Khan also revealed that Ms Kak always seemed to have a book out to coincide with one of his films. "I don't understand whether we are here promoting Tiger Zinda Hai or her book. It had happened earlier, I was doing Sultan with Ali Abbas Zafar, we were planning on going to Ranthambhore, at that time Bina issued a book on a tiger named Sultan, but the plan didn't work out. Now Tiger Zinda Hai is coming and her book is also releasing at the same time," the actor said at the event, reports news agency IANS.