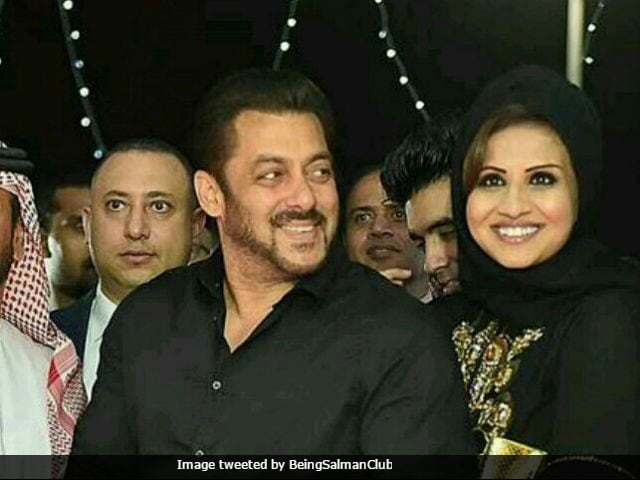 This image has been posted by Salman Khan's fan club (Image courtesy: BeingSalmanClub )

New Delhi: In an irony-rusting piece of hubris, actor Salman Khan performed ribbon cutting duties at a new driving school in Dubai, a hop, skip and jump away from Abu Dhabi where the 51-year-old star is filming Tiger Zinda Hai. The incongruity of Salman, infamously tried for a hit-and-run, inaugurating an outfit that puts people behind the wheel was perhaps lost on the actor himself, his many fans and the Dubai driving school that invited him - but it wasn't lost on Twitter. It was a delicious moment for social media, which invoked convicted rapist Gurmeet Ram Rahim, writer Chetan Bhagat and Rahul Gandhi. Here's a sample of the incredulous tweets posted online:

If Chetan Bhagat can write books, I can also open a driving school.

Salman Khan inaugurated a driving centre in Dubai. That driving school will specifically teach, "how to drive a car over homeless people"

RaGa giving a speech on AI, Salman innaugrating a driving centre is nothing but the real life version of 'Aaj kuch toofani karte hain'

Next Arnab should campaign against Noise Pollution.

Salman Khan Launches a "Driving Centre" in Dubai.
Everyone passing out from the centre will be given a "DRIVER", just in case.#WTF

Just heard that Salman Khan launched a driving school in Dubai! Oh the irony! Next shall be a hunting school!

Salman Khan was asked to open a new branch of Dubai's Belhasa Driving Centre in Al Quoz. He was there courtesy billionaire 15-year-old Belhasa scion Rashed, known as 'Money Kicks' and whose Instagram includes older photos of him hanging out with Salman.

Promoted
Listen to the latest songs, only on JioSaavn.com
It appears to have mattered not a whit that Salman Khan was tried for culpable homicide not amounting to murder in a hit-and-run in which he is accused of killing one person. Salman's lawyers argued that the actor had not been driving and last year, he was acquitted by the Bombay High Court in a verdict that was widely met with outrage.

Meantime, Salman Khan's last film, Tubelight, was coldly received by both critics and cine-goers, denting the actor's bulletproof reputation at the box office. Tiger Zinda Hai, which he's been working on with actress Katrina Kaif, is a sequel to their 2012 blockbuster Ek Tha Tiger.