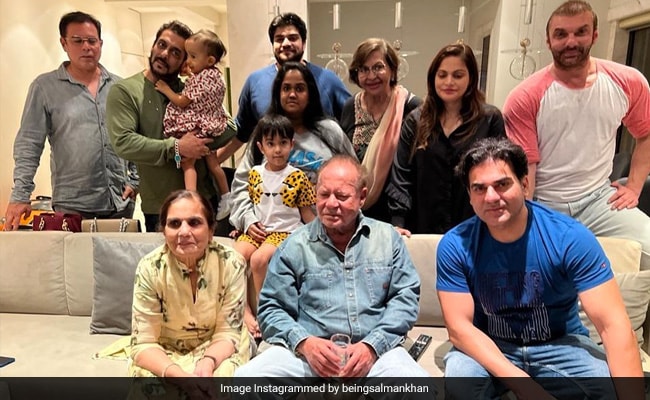 Ready to get starstruck? After all, why not? Our social media feed has brought to us one of the most stellar family postcards from B-town. Salman Khan surprised us with a rare appearance with his family on his Instagram timeline. Wishing his father, Salim Khan, on his birthday, the actor wrote, "Happy birthday, dad." The wish came with a photo where Salman shares the frame with Salim Khan and mom Salma Khan. The snapshot also includes veteran actress Helen, Sohail Khan, Arbaaz Khan, Arpita Khan and her son Ahil, Alvira Khan, Atul Agnihotri and their son Ayaan. What melted our hearts was the sight of Salman holding his niece, Ayat, in his arms. Actress Preity Zinta commented, "Happy Birthday, Salim uncle" and left red heart emojis.

Salman Khan's social media entries often give us a glimpse into his family life. The most adorable posts are the ones that feature his niece, Ayat. Earlier this month, the actor shared an interesting video where Ayat and he are seen feeding a few monkeys. Salman is holding Ayat in his arms as the two feed the monkeys with biscuits and bananas. In the caption, the actor wrote, "Monkey."

On the occasion of Father's Day, Salman Khan shared another family postcard. There we see Salman sharing the frame with Salim Khan, Sohail Khan, Arbaaz Khan and other members of the family. Salman captioned the image, "Happy Father's Day."

Salman Khan will be seen alongside his brother-in-law Aayush Sharma in their next film Antim: The Final Truth. The high-octane action movie is set to be released on November 26. Aayush is married to Salman Khan's sister Arpita. Aayush made his Bollywood debut in 2018 with the film LoveYatri, which was produced by Salman Khan.

Salman Khan has a number of projects lined up. Apart from Antim: The Final Truth, he will be seen next in Tiger 3, co-starring Katrina Kaif, and Kick 2, co-starring Jacqueline Fernandez.