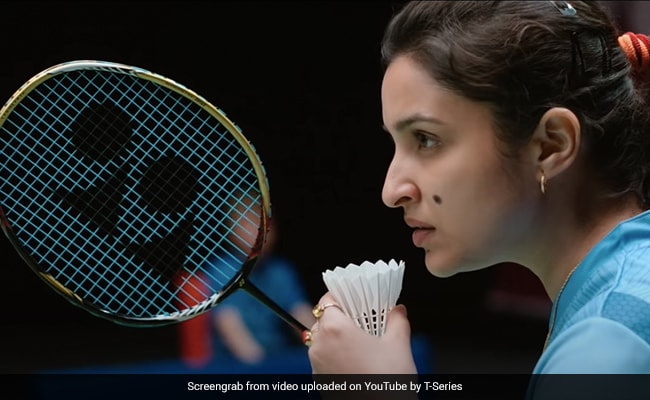 Saina Trailer - Parineeti in a still from the film. (Image courtesy: YouTube)

The much-awaited trailer of Saina Nehwal biopic dropped on the Internet on International Women's Day and it is a captivating portrayal of the badminton champ's dedication to become no 1 player. In the biopic, Parineeti Chopra steps into the shoes of Saina Nehwal and it wouldn't be wrong to say that she has done an excellent job in essaying the stellar badminton player onscreen. Saina also features Manav Kaul, Ankur Vikal, Meghna Malik and Shubrajyoti Bharat. The first half of the trailer shows how a girl from a small village in Haryana dreams of becoming the world's no 1 badminton player and how her parents help her fulfill her dream.

The second half of the trailer highlights the hardship and the obstacles that Saina Nehwal faced before she jumped back into the game with full force and proved herself as an outstanding player.

Sharing the trailer on social media, Parineeti Chopra wrote: "This women's day I am proud to bring to you - SAINA. In cinemas March 26."

SAINA
This women's day I am proud to bring to you - SAINA
In cinemas 26th March.
Watch the trailer now - https://t.co/Egh5NSWJyI@NSaina#AmoleGupte#ManavKaul@eshannaqvi#BhushanKumar@deepabhatia11@Sujay_Jairaj@raseshtweets#KrishanKumar@AmaalMallik

Watch the trailer of Saina now:

Earlier in the day, talking about playing the role of Saina Nehwal onscreen, Parineeti Chopra said in a statement: "It's a huge responsibility to essay someone like Saina Nehwal on screen. She is a legend herself and I was very scared about how people will react, but I'm overwhelmed with the love we are getting from all over the world. The film is a celebration of the unending spirit that lies in each woman."

Saina Nehwal feels that Parineeti has done a fabulous job in the biopic, directed by Amol Gupte. She said in a statement: "Everything is quite surreal. What I have achieved in life is all due to the constant support of my family. It has been my huge honour to play a sport I love and put my country on a pedestal while achieving my dream. Parineeti is a fabulous actor and we both connected so easily when we met."

Last week, Parineeti Chopra shared the teaser of Saina, as well as its release date. Check them out here:

Saina will open in theatres on March 26.