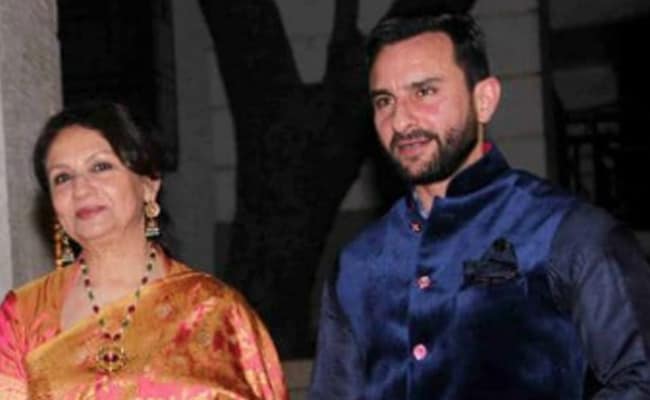 Saif Ali Khan photographed with Sharmila Tagore at an event.

Saif Ali Khan, in an interview with Rajeev Masand, revealed that his actress mother Sharmila Tagore is thinking about joining Instagram. Earlier in the year, Saif's actress wife Kareena Kapoor made her Instagram debut and sent the Internet into a tizzy. Now, the actor talked about his mother's plans of joining the social media platform and said that he might also get on it. In the interview, when Saif Ali Khan was asked why he is not on social media, he replied, "I have always said that I might be on it" and added: "I was just talking to my mother and she was saying should she join Instagram. I said 'Yeah, but you'll have to share pictures, you know.' She said 'Yeah. I need to get to Pataudi and my roses and share that.' I said if she gets on it, I might get on it as well."

In the same interview, Saif Ali Khan also talked about his son Taimur and said that the little munchkin will be devastated when the lockdown ends. "Our kids will be devastated. We are around all the time, this is a dream come true for him. Unless he is fed up of us by the end of it," he told Rajeev Masand.

Saif Ali Khan is spending a lot of time during the lockdown by painting wall-art with Taimur and reading books, glimpses of which we often get on Kareena's Instagram profile. Take a look:

When Saif told me he got me flowers, I had a different idea in mind. Quarantine gifts be like...

My Easter bunnies for life Happy Easter everyone... #StayHome #StaySafe

On the work front, Saif Ali Khan was last seen in Jawaani Jaaneman. His upcoming films are Dil Bechara and Bunty Aur Babli 2.