Saif Ali Khan On Ibrahim's Viral Caption That Irked Fans: "Not Going To Look Like An Old Man For A While"

"Being older doesn't bother me and the fact is that I'm Ibrahim's old man," said Saif Ali Khan 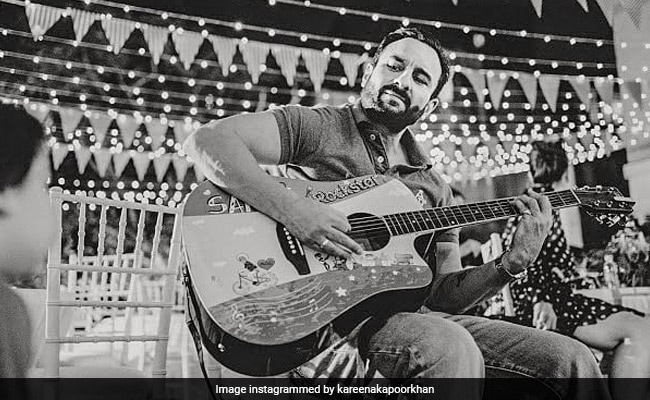 Saif Ali Khan recently opened up about his reaction to son Ibrahim's "old man" caption for a father-son photo on Instagram. Ibrahim Instagrammed a picture of himself and dad Saif with the caption: "Just me and the old man," Ibrahim's caption made Saif's fans take offence , particularly to the "old man" bit. Within minutes of posting, Ibrahim's picture was flooded with comments like "He is not an old man at all" and "Just the young man and you Ibrahim." Speaking of the caption, Saif told Mumbai Mirror in an interview, "Yeah it was quite funny. Being older doesn't bother me and the fact is that I'm Ibrahim's old man. But I'm keen to be fit and look my best. I'm not going to be looking like an old man for a while, but I understand the irony of it."

Take a look at the post by Ibrahim here:

just me and the old man

Ibrahim and actress Sara Ali Khan are Saif's children with his first wife Amrita Singh. Saif was married to actress Amrita Singh for 13 years till they decided to part ways in 2004.

In the interview with Mumbai Mirror, Saif also spoke about whether he plans to launch Ibrahim in Bollywood or not. The Hum Tum actor said, "I don't know if I will launch him. It's an option and films are certainly a viable career choice for him. He's sporty and likes the idea of being in the movies rather than pursuing an academic job." Saif also added, "No one in the family, with the exception of his sister, have been interested in the latter anyway."

Saif Ali Khan's daughter Sara Ali Khan recently featured in Imtiaz Ali's film Love Aaj Kal. The 2009 film of the same name starred Saif and Deepika Padukone in leading roles. Speaking of his daughter's performance in the film which didn't do well at the box office, Saif said, "I am very proud of Sara. Hits and misses are a part of the game."

On the professional front, Saif Ali Khan was last seen in the 2020 comedy drama Jawaani Jaaneman, where he shared screen space with Alaya Furniturewalla and Tabu. He has Bunty Aur Babli 2 and Bhoot Police in the pipeline. Saif, who made his debut as a producer with Jaawani Jaaneman, spoke to Mumbai Mirror regarding his upcoming projects as a producer. He said, "We are negotiating for the rights to make a biopic. I can't divulge details, but it ticks all the boxes for an interesting, box-office friendly story."