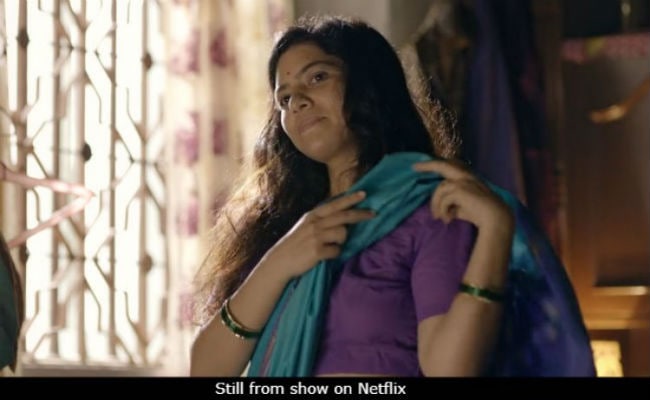 Rajshri Deshpande in a still from Sacred Games (Courtesy: Netflix)

Actress Rajshri Deshpande had been subjected to severe criticism and social media trolling ever since Netflix web series Sacred Games was released. In the web series, the actress has been cast as gangster Ganesh Gaitonde's (Nawazuddin Siddiqui) wife Subhadra, who plays a significant role in his life. The eight-episode web-series, which features Rajshri in a few intimate scenes has been the point of many criticisms. Responding to the social media trolling over her nude scenes, Rajshri Deshpande in an interview to Hindustan Times said that the audience is "immature" and has failed to understand the relevance of the scenes. "Sex is a beautiful thing...coming close is a beautiful thing. It is unfortunate that people are talking about it this way. They (the audiences) are immature and don't understand the relevance of these (sex) scenes. I am not dancing on something which is derogatory. I am making love to my husband and that too not in a crass way," Hindustan Times quoted the actor as saying.

Rajshri, who was part of the much controversial film S Durga, revealed how she felt about the negative reactions she received. "I did feel bad about it (criticism), but I have to move on. I approached this scene as Subhadra's character. As an artist, I have to do my job. I know my intention was not wrong. The writers (Smita Singh, Vasant Nath and Varun Grover) are very good at their job, they would not write something which is not relevant. It is not like a commercial item number, ki pehle item number becho, fir movie bhechege," the actress added.

Rajshri's film S Durga was also subjected to negative repercussion. The film was trolled because it appeared to make references to Goddess Durga and was dropped from being screened at the International Film Festival of India in Goa last year. S Durga was only certified as U/A by the censor board's Revising Committee after it was renamed from "Sexy Durga" and "vulgar words" were removed.

"Imagine this happening to a film which travelled to 50 films festivals and won prestigious awards. No one knows that I am Sexy Durga and that this is my film. My parents live in a small town and they will never be able to see my work because my films will not release there. Here in cities also there is no opening for films like ours," said the actress, who has also been part of Reema Kagti's Talaash, Kick and Angry Indian Goddesses.