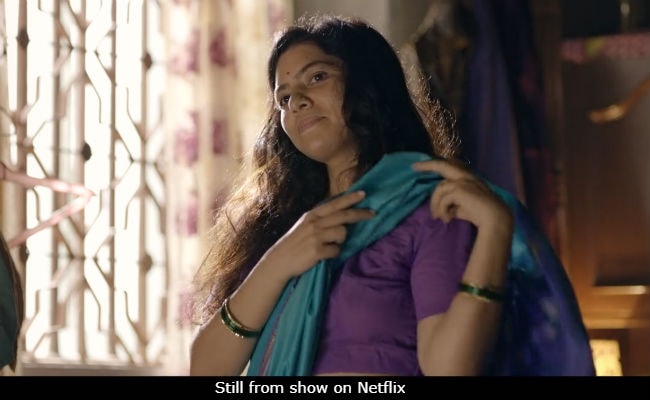 Rajshri Deshpande in a still from Sacred Games (courtesy Netflix)

Remember Rajshri Deshpande, the actress who featured in the controversial Malayalam movie S Durga? Rajshri recently made an appearance in the Netflix original Sacred Games. She's been cast as gangster Ganesh Gaitonde's wife - a woman of few words, but a very significant character. The eight episode web-series features Rajshri in a few intimate scenes with Nawazuddin Siddiqui, including a sultry nude scene. In an recent interview to SpotboyE, Rajshri revealed that she's been receiving lewd messages after Sacred Games released and is also being termed as a porn star. "It was a big thing for me to open up my blouse, but I did it. But little did I know that my pictures from that scene will start circulating on WhatsApp," she said in the interview.

Rajshri, who is visibly surprised with the negative repercussion from a section of the Internet, told SpotboyE that ignoring and moving on is the best way to deal with such reaction. "What do I do but ignore? Some of the comments are terribly cheap. I believe in Kashyap, he had told me about the scene beforehand and even said that he won't go ahead if I am uncomfortable."

Rajshri was also asked if she's prepared to be trolled for her bold scenes in Sacred Games, when she told SpotboyE: "Not again! I have been trolled a lot in the past. During the time of Sexy Durga, I even had death threats. People wrote that they will throw acid on my face. My mom was called names."

S Durga was only certified as U/A by the censor board's Revising Committee after it was renamed from "Sexy Durga" and "vulgar words" were obliterated. The film was trolled for appeared to make references to Goddess Durga and was dropped was from screening at the International Film Festival of India in Goa last year.

Directed by Anurag Kashyap and Vikramaditya Motwane, Sacred Games also stars Saif Ali Khan and Radhika Apte and must be on your binge-watch list, if not already.