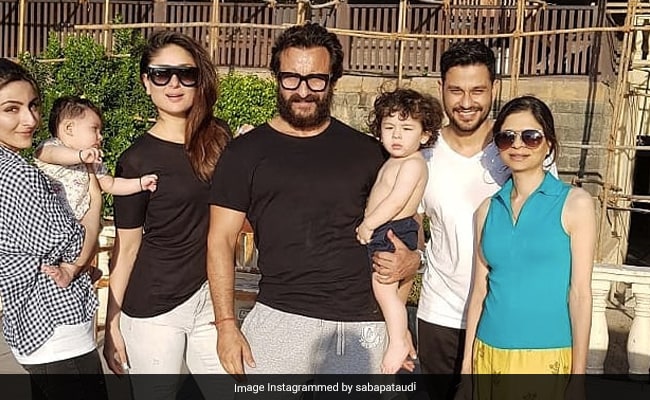 Saif Ali Khan's sister Saba Ali Khan, on Wednesday, treated the actor's fans to an unseen throwback family picture. The picture that Saba shared on Instagram features her with her siblings, Saif and Soha Ali Khan, and their spouses, Kareena Kapoor and Kunal Kemmu, respectively. The picture also features Kareena Kapoor and Saif Ali Khan's son Taimur Ali Khan, and Soha Ali Khan and Kunal Kemmu's daughter Inaaya. While the entire "Khan Kemmu khandan" looks stunning in the picture, the show-stealers are Kareena Kapoor and Saif Ali Khan, who can be seen twinning in matching outfits. Both Kareena and Saif can be seen wearing black T-shirts in the picture. While Kareena paired her T-shirt with grey leggings, Saif Ali Khan wore grey shorts with his tee. Sharing the picture on Instagram, Saba wrote: "Flashback...! Part II KKK...Khan Kemmu khandan. Lol... Just. I had the original pic. So here's the rest of the gang. #familylove #alwaysandforever #wednesdaymood #stayhome #staysafe."

Yesterday, Saba had shared another picture from the same photo series but Kareena Kapoor and Taimur Ali Khan were missing from it. "Flashback! Family ties...we stick together. Been wanting to post this for a while.... Simple carefree and happy times," she had written in the caption of the post.

Saba Ali Khan's Instagram feed is a repository of some of the most unseen pictures of the Pataudi family. Last week, she had dug out, one of her "hidden treasures," featuring her and Soha with Kareena Kapoor. The picture was clicked on the third birthday celebration of Saif Ali Khan and Kareena Kapoor's son Taimur Ali Khan. In the picture, Soha and Kareena, can be seen twinning in matching outfits. "A Moment in time .... #Don't know where this pic was until NOW!Hidden treasures #saturdaypost #familylove #timtim #3rd #birthday #sisters #forever #love #you #kareenakapoorkhan #sohaalikhan #myjaan #inaayanaumikemmu #always," Saba wrote in the caption of the post.

Earlier, on the occasion of Mother's Day, Saba Ali Khan had shared a collage featuring some priceless pictures of herself with her mother, actress Sharmila Tagore. The collage also consisted of some pictures of Kareena and Soha, with their children.

Daughter of Sharmila Tagore and late cricketer Mansoor Ali Khan Pataudi, Saba Ali Khan is a jewellery designer by profession. Besides sharing pictures of the Pataudi family on social media, she often gives a glimpse of her jewellery designs to her Instafam.