Saaho is a high-octane action film, directed by Sujeeth 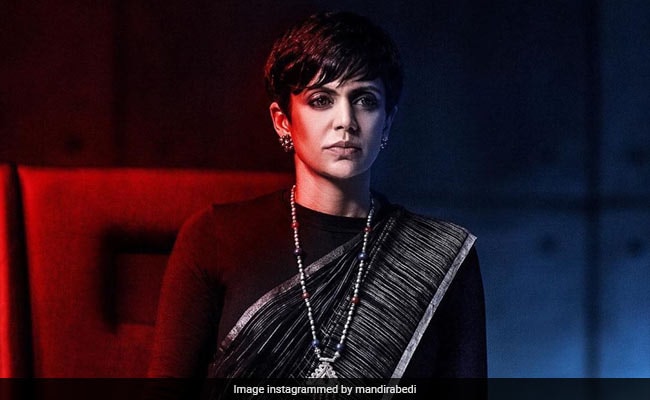 The posters of Saaho keep getting better and better. On Friday, the makers of the film released the first look of Mandira Bedi from the film and intense is how we would describe it. The 47-year-old actress, who will be seen as one of the antagonists in the action film, can be seen dressed in a black and grey saree as she fiercely stares at the camera. Mandira's edgy hairdo and smokey eyes add a hint of drama to her look. Sharing her look from the film on Instagram, Mandira Bedi wrote: "Kalki - When good is bad. Giving us some major intense vibes, here comes the new character poster of Mandira Bedi as Kalki."

Other than Mandira Bedi, Jackie Shroff, Chunky Panday, Neil Nitin Mukesh will also be seen in negative roles in the film. The makers of the film introduced us to the villains of team Saaho. Take a look at the posters here:

Here's #Vishwank from #Saaho .. I'm sure you will love the character as much as I loved playing it!! #SaahoFromAug30th @actorprabhas @shraddhakapoor @neilnitinmukesh @uvcreationsofficial @tseries.official @sujeethsign

Saaho is scheduled to release on August 30. The film was earlier slated to release on Independence Day and it would have clashed with John Abraham's Batla House and Akshay Kumar's Mission Mangal. The much-awaited trailer of Saaho will release on Sunday. Saaho has been directed by Sujeeth and it will release in Hindi, Telugu and Tamil.