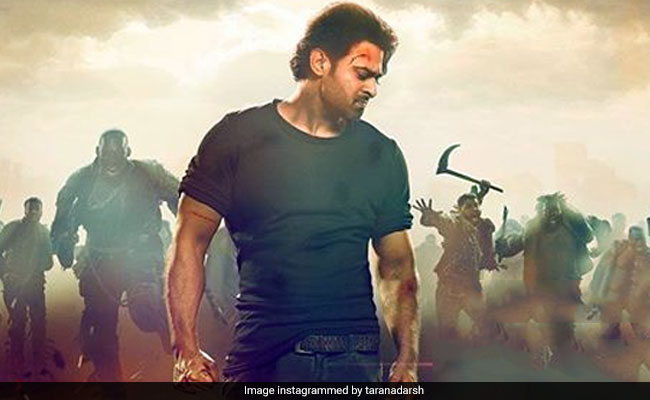 Saaho Box Office: Prabhas on a poster of the film (courtesy: taranadarsh)

Prabhas and Shraddha Kapoor's new release Saaho (Hindi version) debuted at the box office with "fantastic numbers", said trade analyst Taran Adarsh. The Hindi version of Saaho has raked as the one with third highest opening day collection of 2019 films so far - Saaho wrapped Day 1 with as much as Rs 24.40 crore. Mr Adarsh assigns credit for Saaho's impressive numbers to three key points - Prabhas' huge fan base, the much hyped wait for the film and early bookings. However, the weekend days will prove to be "crucial" for Saaho for "solid" first weekend numbers. Saaho, which also released in Telugu, Tamil and Malayalam, marks Prabhas' first Hindi film.

Take a look at his box office report card for Saaho.

The high-budget action-thriller is reportedly made on a budget of Rs 350 crore. Action director Kenny Bates of Transformers and Italian Job fame choreographed the action sequences with technicians from Game Of Thrones contributing to the project.

Written and directed by Sujeeth, Saaho opened to middling reviews on Friday. Saaho is Prabhas' first film after the massively successful Baahubali series. Prabhas co-stars with Shraddha Kapoor in the movie.