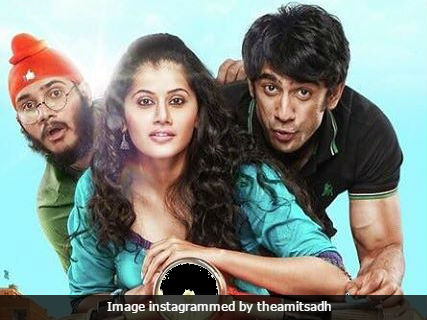 New Delhi: Just days ahead of the release of his film RunningShaadi.com, actor Amit Sadh told news agency PTI that the 'wait was frustrating'. The romantic-comedy film, produced by Shoojit Sircar has been awaiting release for two years. RunningShaadi.com also stars Pink actress Tapsee Pannu and is set to hit the theatres on February 17. "Runningshaadi.com is finally coming out; the waiting period was frustrating." Amit Sadh told PTI. "I have done a PhD in waiting. To wait for anything is painful and frustrating. It was supposed to come out after Kai Po Che! but that did not happen, it was to release last year but then as it is a small film so to get a right release date is a challenge". The actor added.

"The good thing is the film is releasing now. The trailer is out and it's getting overwhelming response and the vibe of the film is also spreading," Sultan actor Amit Sadh told PTI.

Watch the trailer of RunningShaadi.com:

The 37-year-old actor also shared his equation with director Amit Roy during the journey of the film. "Over a period of time director Amit Roy and I have become good friends. I told him I don't know if the film will be a hit or not but I am sure the film will release one day. I believe anything made with honesty, hard work and good intent can't go wrong," the actor said.

Amit Sadh told PTI that he was bowled over by the plot of his upcoming film. "It was an instant yes to do the film. It has an interesting story with an immature love story. It has elements of comedy but it's not forced humour. It is a quirky film; it is a relevant film as marriages will continue to happen in India. It's not a typical rom-com," Amit said.

Amit Sadh believes that the plot of RunningShaadi.com is unique and will surely keep the audience glued to their seats. "It's a unique concept of helping people run away with the love of their life to get married. The unlikely duo of a conscientious Bihari and a Sardarji geek stand up and create a platform to couples who want to spend their lives with their soul mates" Amit Sadh told PTI.

Promoted
Listen to the latest songs, only on JioSaavn.com
Amit Sadh's character in RunningShaadi.com is shown running a website that helps people elope to marry their loved ones. Amit Sadh has been a part of reality shows like Nach Baliye, Bigg Boss and Fear Factor. He was last seen in Salman Khan's Sultan, in which he played a role of a businessman Aakash Oberoi.