"I had the privilege and opportunity to represent him," wrote Upasana Kamineni Konidela 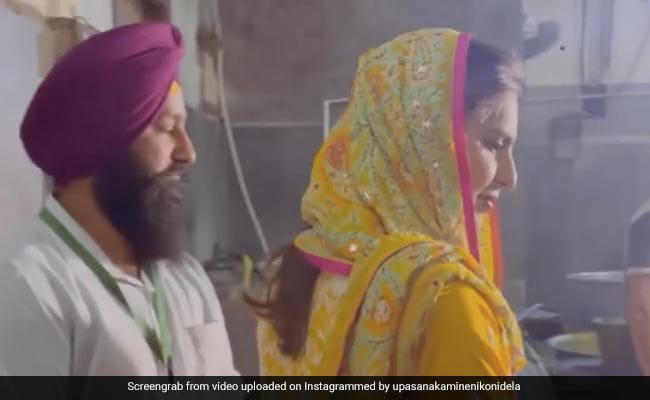 Ram Charan has organised a langar seva at Golden Temple, Amritsar after the massive success of his last release RRR. While the actor is busy shooting for his next, his wife Upasana Kamineni Konidela represented him. On Tuesday, she shared a video from the langar seva and wrote, "As a mark of gratitude Mr. C hosted a langar seva at the golden temple in Amritsar. I had the privilege & opportunity to represent him by participating in the seva as he was shooting for #RC 15. This truly fed my soul. Rc & I feel blessed with your love & accept it with humility @alwaysramcharan." Ram Charan expressed gratitude for the success of RRR.

The Gurudwara Committee gifted a portrait of the Golden Temple to Upasana Kamineni Konidela, reported ANI.

Ram Charan is currently shooting for his fifteenth film, opposite Kiara Advani in Amritsar, Punjab. The film is being directed by S Shankar. The untitled film has been written by Karthik Subbaraj and produced by Dil Raju and Sirish under Sri Venkateswara Creations. RC15 also has Anjali, Jayaram, Sunil, Srikanth, and Naveen Chandra in supporting roles. This will be Kiara Advani's second Telugu film with Ram Charan after Vinaya Vidheya Rama. The film was announced in February 2021.

Ram Charan was last seen in S S Rajamouli's RRR, which broke many records. RRR is the highest-grossing Indian film since the pandemic began in 2020 and the third-highest-grossing overall. It has minted over Rs 1000 crores. RRR also stars Jr NTR, Alia Bhatt, and Ajay Devgn in key roles and released in March.

On the work front, Ram Charan also has Acharya with his father Chiranjeevi.