The teaser appears to offer glimpses of Rajkummar Rao and Varun Sharma dressed like grooms while the mystery woman, behind the ghunghat, seems to be Janhvi Kapoor 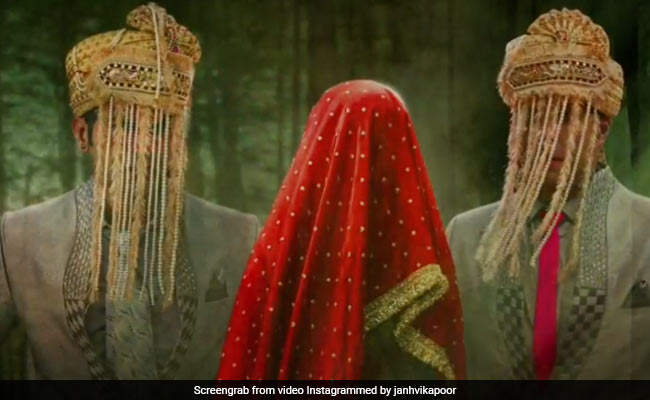 Janhvi Kapoor and Rajkummar Rao's much-awaited horror comedy gets a new title - Roohi - and a brand new release date - March 11. A day after Valentine's Day, both Janhvi Kapoor and Rajkummar Rao shared the first glimpse of the movie in separate Instagram posts. "Dulhan ki tarah sajenge theatres. Magar Dulha le jaegi Roohi! Iss Bhootiya Shaadi mein aapka swagat hai," wrote Rajkummar while sharing the teaser while Janhvi sent an invitation to a spooky wedding: "Iss bhootiya shaadi mein aapka swagat hai." Roohi is centered around the story of a singing spirit, who puts grooms to sleep in order to possess their brides. The teaser offers a glimpse of just that, as it is set to a humming noise, presumably of the titular spirit Roohi.

Directed by Hardik Mehta, Roohi also stars Varun Sharma. The teaser appears to offer glimpses of Rajkummar Rao and Varun Sharma dressed like grooms while the mystery woman, behind the ghunghat, seems to be Janhvi Kapoor. Here's what Janhvi shared about Roohi on Instagram:

Previously, the film underwent multiple name changes - earlier, it was named Roohi Afzana from Roohi Afza. With a release date in March, Roohi will be one of the first movies to have a theatrical release after the Ministry Of Information And Broadcasting allowed cinema halls across the country to operate at full capacity from February 1, however, keeping COVID-19 safety protocols in place.

Dinesh Vijan of Maddock Films, who has produced Roohi, said in a statement: "While Stree was a genre bending tale that gave audiences something never seen before, Roohi takes this vision a step further by offering the same brand of spine chilling scares and quirky comedy. With a partner like Jio Studios that shares our passion for the eponymous 'bada parda', we hope 'Roohi' rekindles the audience's long standing romance with the silver screen. It is a film tailor made to be viewed at your nearest theatre," reported news agency PTI.

Jyoti Deshpande, who is the President of Media and Entertainment for Reliance Industries told PTI in a statement: "We owed it to our partners across the value chain, be it Maddock or the cinema exhibitors, to hold on to our fabulous film for this day and give it the grand release that it deserves and promise a complete entertainment experience to our audiences who have waited over a year for this. With Roohi, the magic of cinema is back... come celebrate with us. We promise to make you smile under your masks."