"It Wasn't Easy To Date A Heroine": RJ Anmol On Amrita Rao

The couple shared details about their courtship in a YouTube video 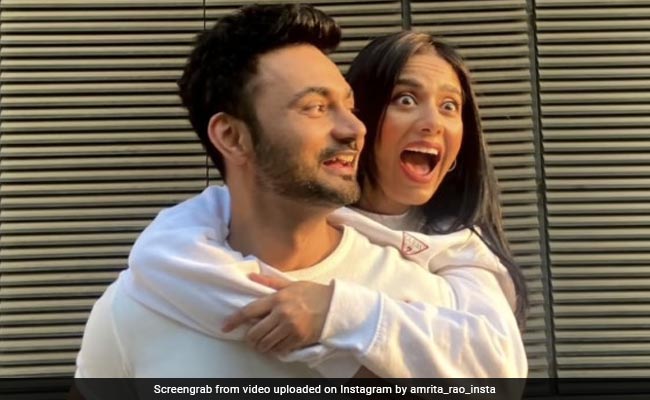 Amrita and RJ Anmol in a video. (courtesy amrita_rao_insta)

Amrita Rao and RJ Anmol sat down for a candid chat with each other on their YouTube channel, Couple Of Things. Over the course of several episodes, the couple has offered fans an insight into their relationship – encompassing their journey from being friends to the parents of their son. This time around, the freewheeling chat has Amrita Rao asking RJ Anmol questions and is filled with laughter and banter. Right at the onset, RJ Anmol declared that it “wasn't easy to date a heroine," keeping in mind how all eyes were on Amrita Rao who had just given the biggest hit of career, Vivah, when they started dating.

In a chat, Amrita Rao and RJ Anmol said that the reason to keep their relationship under wraps for years was a mutual one. Amrita said, “We did not share it with anybody except immediate family members,” adding that it was her choice to do so because, given her popularity, word would have spread like wildfire. RJ Anmol, on the other hand, said that while he often wanted to scream from rooftops that he was dating Amrita, he refused to do so as he would have been known as just “Amrita Rao's boyfriend.”

While he said that he is proud to be called Amrita Rao's boyfriend and husband, the self-resilience in him ensured that he first made a name for himself before his name was attached to anyone else. He said that he wanted to be known as “RJ Anmol” and not just as anyone's son or husband.

Amrita Rao then went on to ask if RJ Anmol ever felt insecure about the fact that while he was just beginning his career when they began dating, Amrita was already a well-established star. RJ Anmol said that he has a strong sense of self-love and self-confidence. Moreover, he said that he had accepted right at the beginning that he was dating “Amrita Rao, a Bollywood star” who was more famous than him. “This acceptance is much more important,” he said.

Amrita Rao even pointed out that while her co-star's girlfriends were often jealous, RJ Anmol never exhibited any sense of jealousy. RJ Anmol, however, admitted that he was insecure when Amrita Rao would be on set and would not reply to his messages for hours together. He said that he solved the problem by communicating and telling her how he felt honestly.

He further said that there were times people walked up to them and handed him the phone to click a photo with Amrita Rao. “Now that can break a person, I am telling you that,” he said, explaining that he then understood that this is no one's mistake and just the fans' love for the actress.

Sharing the video, the couple wrote in the caption, “For the first time ever – We are sharing our insecurities...our differences...our difficulties in this relationship with diverse dynamics and how we dealt with those challenges – Head on.”

Amrita Rao married RJ Anmol after 7 years of dating in 2016.