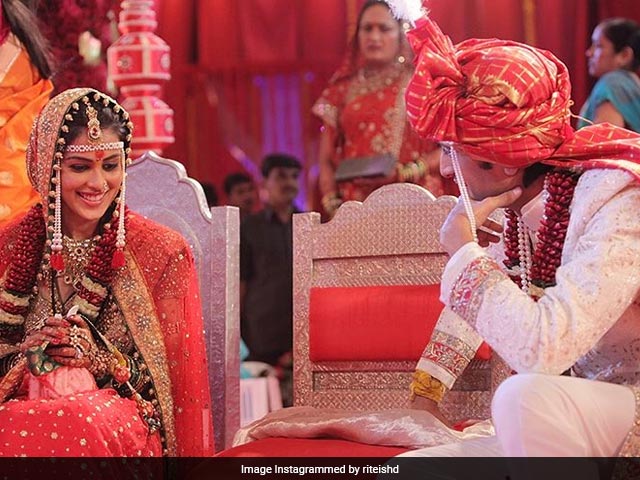 Riteish Deshmukh shared a picture from his wedding (courtesy: riteishd)

New Delhi: Actor couple Riteish Deshmukh and Genelia D'Souza celebrate their 5th wedding anniversary today and the couple wished each other with adorable posts on Instagram. Riteish, 38, shared a throwback picture from their wedding day and said: "I look at you and find myself, a stronger self, a better self, a happy self, a blessed self." Genelia, 29, who also shared a throwback picture and wrote: "I will always hold onto you so tight and that's because I know something so amazing doesn't happen twice. Thank you for changing the meaning of "Home" from a place to a person for me."

Take a look at Genelia and Riteish's Insta-love story here:

I will always hold onto you so tight and that's because I know something so amazing doesn't happen twice..Happy Anniversary @riteishd .. thank you for changing the meaning of "Home" from a place to a person for me.. #mykindalove #wedidgoodhoney #tothebestandrestofourlives

I look at you & find my self, a stronger self, a better self, a happy self, a blessed self. Happy Anniversary Baiko @geneliad #5years

Genelia and Riteish keep their fans and followers updated with cute posts on Instagram and we love it:

My most Favourite person in the whole world... #HappyBirthdaySpecial

Thank you @riteishd for being the best friend to me... #happyfriendsday

Riteish Deshmukh and Genelia D'Souza first co-starred in 2003 film Tujhe Meri Kasam. They also worked together in Masti which released in 2004 and their last film together was 2012's Tere Naal Love Ho Gaya.

Promoted
Listen to the latest songs, only on JioSaavn.com
Riteish and Genelia got married in 2012 and their first son, whom they've named Riaan, was born in 2014. The couple welcomed their second son, Rahyl, in June last year.

Riteish was seen in 2016 films Housefull 3, Great Grand Masti and Banjo. His upcoming films are Bank Chor and Mauli. As for Genelia, the Jaane Tu Ya Jaane Na actress last featured in 2012 films Tere Naal Love Ho Gaya and Naa Ishtam (in Telugu). She had cameos in the movies Jai Ho, Lai Bhaari and Force 2.