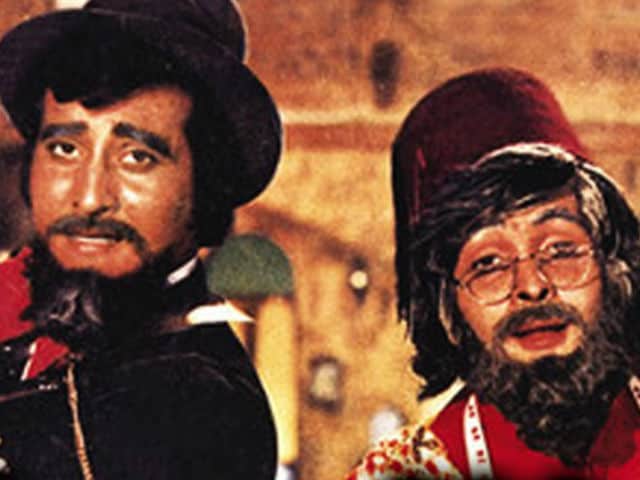 New Delhi: Actor Vinod Khanna's friend and co-star Rishi Kapoor, who earlier changed his display picture, bio on Twitter to honour him, shared another picture with Mr Khanna from their film Eena Meena Deeka, also featuring Juhi Chawla. "In fun times. When VK played AB, I played VK and Juhi played RK. Only David Dhawan could think this," Mr Kapoor captioned his post. Vinod Khanna died at the age of 70 of cancer in a Mumbai hospital on Thursday afternoon. His last rites were held in the evening, which was attended by Amitabh Bachchan, Rishi Kapoor, Jackie Shroff, Gulzar and other Bollywood celebrities. Rishi Kapoor had condoled Mr Khanna's death in a series of tweets.

In fun times. When VK played AB, I played VK and Juhi played RK. Only David Dhawan could think this! pic.twitter.com/nmNH80NXZr

After the funeral, Rishi Kapoor, who has co-starred with Vinod Khanna in other films like Amar Akbar Anthony and Chandni, in a series of tweets, rallied against "actors of this generation," for not attending Mr Khanna's last rites. "Shameful. Not one actor of this generation attended Vinod Khanna's funeral. And that too he has worked with them. Must learn to respect," he tweeted. He also explained that if his wife Neetu Singh and son Ranbir Kapoor would have been in the country, they would have made to Mr Khanna's funeral.

Angry. Met so many chamcha people last night at Priyanka Chopra's do last night. Few at Vinod's. So fuckn transparent. So angry with them.

Promoted
Listen to the latest songs, only on JioSaavn.com
As 'mark of respect,' filmmaker Karan Johar had cancelled the premiere of his film Baahubali: The Conclusion, which was scheduled in Mumbai on Thursday.

Vinod Khanna, the star of films like Achanak, Hera Pheri, Haath Ki Safai, Mera Gaon Mera Desh and Muqqadar Ka Sikander was admitted to HN Reliance Foundation and Research Centre on March 31. He was the BJP MP from Gurdaspur, Punjab.