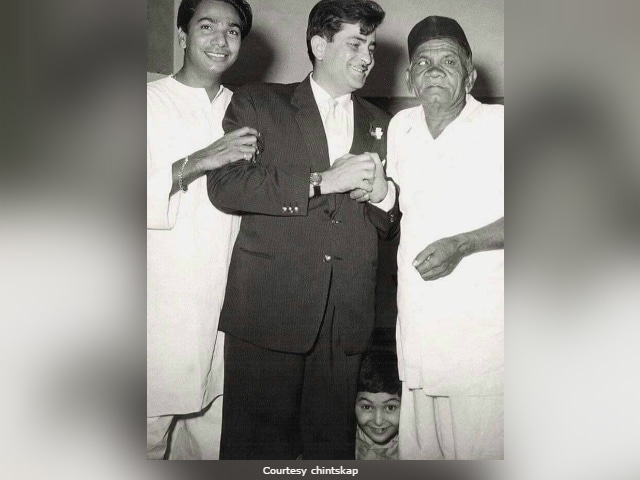 New Delhi: Throwback is passe. Throwback with a twist is what Rishi Kapoor is setting goals for. The 64-year-old actor posted a black and white photograph from the days when he still had to be escorted by a keeper (presumably, he was not even a teenager), featuring his father, legendary actor Raj Kapoor and music composer Dattaram Wadkar. Apart from the nostalgic flavour of the photograph, what makes it all the more interesting is Rishi Kapoor's presence in it. "My childhood chaperone Dwarka (right) with dad and Dattaram ji (music director) Please see from where I am peeping," wrote Mr Kapoor. If you still can't spot him, look towards the bottom of the picture for a delightful surprise.

Rishi Kapoor said his peek-a-boo appearance was like a "ritual" when photographs were taken.

My childhood chaperone Dwarka(right) with dad and Dattaramji(music director) Please see from where I am peeping. I was a compulsive riot lol pic.twitter.com/ThxK9dzH7u

Raj Kapoor and Dattaram Wadkar must have caught up to discuss work. Mr Wadkar composed music for Raj Kapoor films in the Fifties and the Sixties.

Rishi Kapoor, who is known to be very outspoken on Twitter, has his Twitter media loaded with blasts from the past. He recently featured in a throwback pic with "Kancha Cheena" Sanjay Dutt. "Back in the Nineties," he wrote for this picture.

Rishi Kapoor, who was last seen in Shakun Batra's Kapoor And Sons, summarised his entire career in a photograph. "Been a satisfying journey," he wrote. He made his acting debut with 1970's Mera Naam Joker, starred and directed by his father.

Been a satisfying journey! MNJ-K&S. Adolescence to old age! pic.twitter.com/Q9Ax9wi9UP

Promoted
Listen to the latest songs, only on JioSaavn.com
Meanwhile, there also arrived a throwback picture featuring Shashi Kapoor on the actor's 64th birthday in March. "Many Happy Returns of the Day uncle! God Bless," he wrote.

Rishi Kapoor welcomed this year releasing his autobiography, in which he made explosive revelations about his father's affair with Nargis and his co-star Amitabh Bachchan. Rishi Kapoor will next be seen in a small role in Nawazuddin Siddiqui's Manto, which went on floors last month.