Once again, Rishi Kapoor appeared to criticise them for Ranbir's flop films 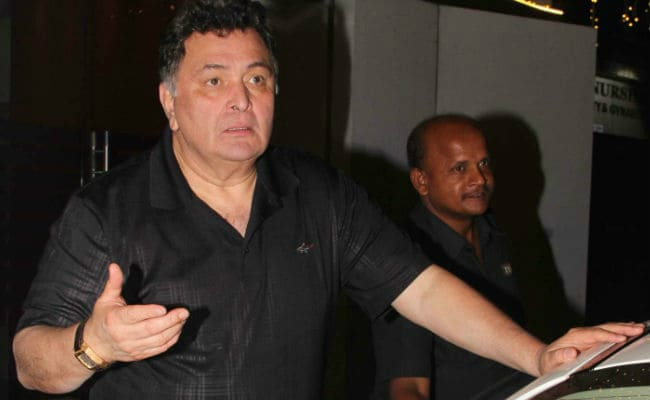 The very outspoken Rishi Kapoor plugged in comparisons to Bombay Velvet and Jagga Jasoos while talking about Ranbir's blockbuster hit Sanju in an interview with Huffington Post. Mr Kapoor, who previously confessed to hardly ever enjoying Ranbir's films, told Huffington Post: "It was a pretty good film, unlike both Velvet or Jagga. They were bad films. They were indulgent. Even Sanjay Leela Bhansali made Saawariya. I mean his forte is something else and he made something else." Anurag directed Ranbir in 2015's Bombay Velvet, which tanked at the box office. "Anurag Kashyap, you give him so much money, he literally didn't know what to do with it," Rishi Kapoor said in the interview.

Meanwhile, Anurag Basu was also not spared as Rishi Kapoor went on to say: "Jagga Jasoos was such a bad film, such a bad story. It was absolutely rubbish. I questioned Ranbir and he said, 'Papa, the man who gave me Barfi, how could I question his... I thought he'd be responsible enough to know to keep the story at its point'," Huffington Post reported. Last year's Jagga Jasoos, which was much delayed, hit screens to a rather cold response at the box office.

Well, this is not the first time that Rishi Kapoor has launched scathing attacks on the directors after Ranbir worked with them. Last year, speaking to Neha Dhupia on her talk show No Filter Neha, Rishi Kapoor said: "Anurag? There is Anurag Kashyap, who made Bombay Velvet, but he made a better film in Gangs of Wasseypur, I couldn't understand head or tail of Bombay Velvet," reported news agency ANI.

Adding to his point, Rishi Kapoor mentioned Mr Basu as well: "Then there is Anurag Basu who made Barfi and I am thankful to him for casting my son Ranbir in it. My son got great recognition because of the movie. But then he made this Gajja Jasoos... Jagga Jasoos. The film was as messy as my pronunciation. He probably just got too much indulged in the movie."

Earlier, speaking to mid-day in an explosive interview, Rishi Kapoor dismissed Anurag Basu as "irresponsible" for endlessly delayed the Jagga Jasoos and having shelved it multiple times: "He (Anurag) is such an irresponsible director that he doesn't complete the film. It was supposed to release three times in the past two years, but it kept getting delayed."

However, Ranbir Kapoor has Rishi Kapoor's full approval for Sanju, the popularity of which in theatres have translated into over Rs 330 crores and counting. Directed by Rajkumar Hirani, Sanju is a biopic on the controversial life of Sanjay Dutt and also has an ensemble cast starring Sonam Kapoor, Anushka Sharma, Dia Mirza, Vicky Kaushal, Manisha Koirala and Paresh Rawal.

Rishi Kapoor will soon be seen in Mulk, which releases on August 3.