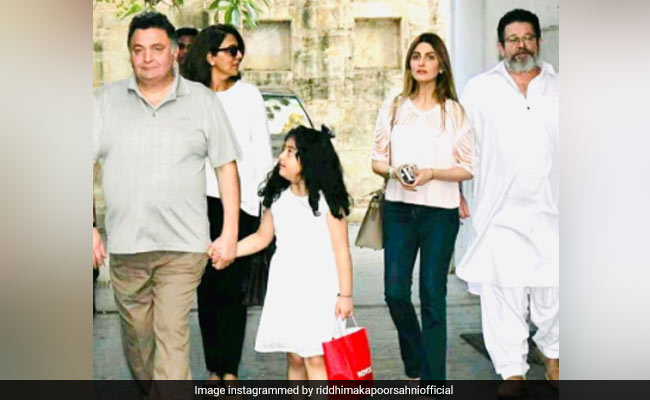 Rishi and Neetu Kapoor's daughter Riddhima Kapoor Sahni shared a beautiful family photo from her throwback treasury on Tuesday and it will surely melt your heart. The photo features Rishi Kapoor, who died in Mumbai on April 30, his wife Neetu Kapoor, Riddhima, her daughter Samara and Rishi Kapoor's cousin Kunal Kapoor. In the throwback picture, Rishi Kapoor can be seen walking while holding Samara's hand with the little munchkin looking at him adorably. Neetu, Riddhima and Kunal Kapoor can be seen walking behind them. Sharing the photo, Riddhima Kapoor Sahni wrote nothing and just captioned it with a heart emoji. 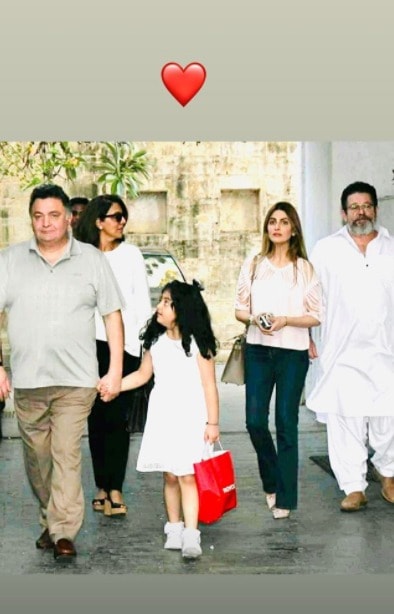 On the day of Rishi Kapoor's death, Riddhima shared a heart-wrenching post, in which she wrote: "Papa, I love you. I will always love you - RIP my strongest warrior. I will miss you every day. I will miss your FaceTime calls every day! I wish I could be there to say goodbye to you! Until we meet again papa, I love you - your Mushk forever." Rishi Kapoor died on the morning of April 30. Riddhima, who lives in Delhi with her husband, couldn't attend her father's final rites due to the lockdown regulations. She was then granted permission to drive to Mumbai from Delhi to be with her family.

Rishi Kapoor, 67, battled cancer for two years and spent most of last year undergoing treatment in New York, where Riddhima and the actor's son Ranbir frequently visited him.

The actor was last seen in The Body, co-starring Emraan Hashmi.