Needless to say that Riddhima's mom Neetu Kapoor was one of the first ones to hit the like button on the post. 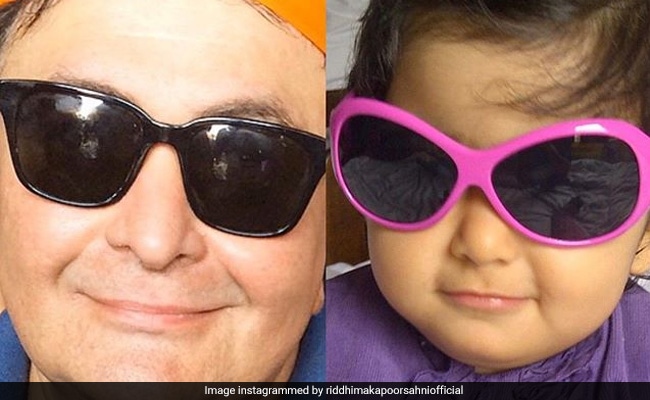 Rishi Kapoor's daughter Riddhima Kapoor Sahni shared her absolute favourite photo of all times, also featuring her late father, on Saturday and it will put a smile on your face. Riddhima, who added the hashtag "Twinning" to the photo, let the collage do all the talking. The photo features Rishi Kapoor, rocking a pair of sunglasses, along with a young member of the Kapoor family - which could be Riddhima's daughter Samara, who is now seven-years-old. "Most fave pic," Riddhima captioned her post. Needless to say that Riddhima's mom Neetu Kapoor was one of the first ones to hit the like button on the post.

Riddhima Kapoor Sahni filled up her Instagram with some of her most-cherished memories with Rishi Kapoor after the actor's death.

❤️ "A Great Soul" by Maya Angelou "A great soul serves everyone all the time. A great soul never dies. It brings us together again and again." We love you Papa

In her send-off note to Rishi Kapoor, Riddhima had poured her heart out and written: "Papa, I love you I will always love you - RIP my strongest warrior. I will miss you every day. I will miss your FaceTime calls every day! I wish I could be there to say goodbye to you! Until we meet again papa. I love you - your Mushk forever."

Riddhima, who currently appears to be with her family in Mumbai, gifted a dog to her mother Neetu Kapoor recently. They've named their Shih Tzu puppy Doodle. Riddhima recently introduced the youngest member of the Kapoor family with this post.

Rishi Kapoor died in Mumbai on April 30. Riddhima, who is a jewellery designer based in Delhi, travelled by car to be with her family at that time. While she couldn't make it to the funeral, Riddhima was part of Rishi Kapoor's prayer meet at the Kapoor residence.