Richa Chadha On Dharmendra: 'They Don't Make Them Like You Anymore'

Richa Chadha had the ultimate fan girl moment, when she met Dharmendra 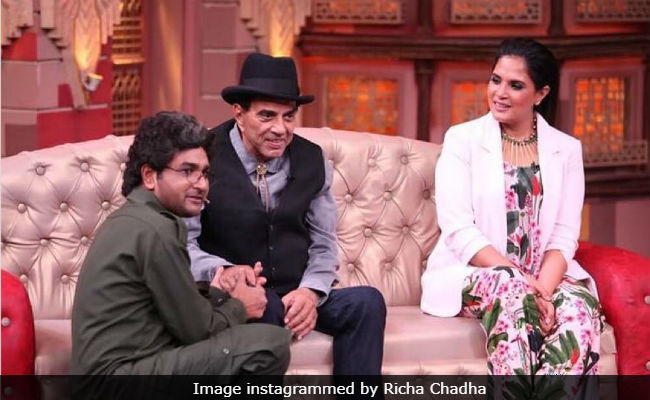 New Delhi: Dharmendra's list of fans is never-ending and Richa Chadha is definitely on the list. The 31-year-old actress shared posts of her fan girl moment with actor Dharmendra on Twitter and Instagram on Wednesday. The Fukrey actress posted a picture with Dharmendra (apparently on the sets of a television show) and captioned it: "Such a dream to meet this gentleman, full of love and compassion, old-world grace. A man of such class and integrity. What happened 2018? We have more boys than men." She added the hashtags "#dharamendra" and "#legend" to make her point crystal clear. The photo received over 6,000 likes within two hours. The 31-year-old actress tweeted the same picture and wrote: "Don't make them like you anymore." Dharmendra's fans were happy after reading Richa's post. "He is such a lovely and simple man, so full of love," read one comment. Another Instagram user wrote, "Two legendary actors together".

Such a dream to meet this gentleman... full of love and compassion, old-world grace... a man of such class and integrity...what happened 2018? We have more boys than men! thanks @mubeensaudagar for the pic. #dharamendra #Legend

Richa, who made her Bollywood debut with Oye Lucky, Lucky Oye opposite Abhay Deol, is a quite active on social media and doesn't shy away from sharing different facets of her life with her fans. She recently posted a moving Mother's Day post on Instagram.

Happy Mother's Day Mummy ! To the most beautiful and kind person I know. I am not being partial, your students will agree... Must have done something right to deserve you as a mother. I have inherited your heart and your spine... they will outlast me even. I love you... the hardest part of my job is that I have to live away from you...everyday is Mother's Day... but today gave me an occasion to post.

Promoted
Listen to the latest songs, only on JioSaavn.com
The Gangs of Wasseypur actress is dating her Fukrey co-star Ali Fazal. The couple even attended this year's post-Oscars party together. Victoria & Abdul, in which Ali Fazal played the titular Abdul, was nominated in two categories at the Academy Awards. The couple had confirmed their relationship last year, when Ali posted a picture with Richa on Instagram and captioned it: "Hai to hai."

Richa Chadha was last seen in Sudhir Mishra's Daas Dev, a modern rendition of the classic Devdas. She is currently shooting for Ghoomketu, which also features Nawazuddin Siddiqui. Apart from that, she has Love Sonia, Cabaret and Section 375 in pipeline.