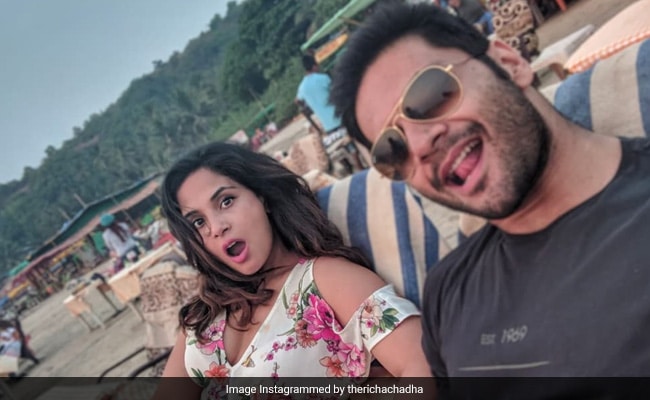 Richa Chadha and Ali Fazal have been featuring in headlines, courtesy the many reports of their wedding date. While the star couple is yet to announce their wedding date officially, reports about a possible October wedding have been doing the rounds. Amid all this, a Twitter user confused Ali Fazal with Pakistani singer and actor Ali Zafar. Richa Chadha was quick to correct the Twitter user for the oopsie. Replying to the now-deleted tweet, Richa Chadha wrote: "Ali Zafar is a Pakistan singer/actor, who is already married."

Later, when a Twitter user pointed out how quick the actress was in correcting the Twitter user. To this Richa replied, writing: "Am also a fact checker."

Am also a fact checker https://t.co/Vk1bcJJB7M

Ali Fazal and Richa Chadha are said to be have been dating since 2015. They confirmed their relationship status in the year 2017, when the 3 Idiots actor Instagrammed a selfie with Richa Chadha, saying: "Hai toh hai." Richa Chadha and Ali Fazal, co-stars of Fukrey, also shared screen space in Fukrey Returns. They also had extended cameos in Netflix's Call My Agent: Bollywood.

Richa Chadha, during an interview last month with News18, said this when asked about her wedding plans: "I think shaadi... shaadi ho jaegi iss saal. Kar lenge kisi tarah se (We will get married this year, will marry somehow). We're very excited to get married but just worried about Covid and want to be responsible. Don't want to be in the news for the wrong reasons. Plus, we've both gotten really, really busy when stuff opened up, and work resumed at full pace. So I'm saying we have to like do a live production job of taking combination dates and making this happen this year."