Rhea Chakraborty On Rumours Of Her Participation In Bigg Boss 15 Actress Rhea Chakraborty, on Saturday, dismissed the rumours of her participation in Salman Khan's upcoming reality show Bigg Boss 15. The actress shared a statement on her Instagram story that read: "I believe there are some rumours about me being a part of the TV show Bigg Boss, this is just to clarify that there is no truth to these rumours. I am not part of Bigg Boss. Love and Light, RC." Rhea Chakraborty's clarification arrived after a few media reports stated last month that the actress will be one of the contestants on the reality show, which premiered on Colors TV on Saturday. 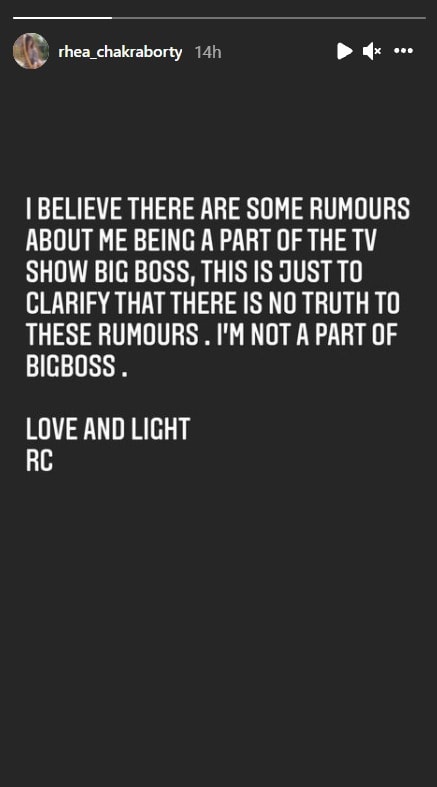 Rhea Chakraborty, who has featured in films like Tuneega Tuneega, Mere Dad Ki Maruti and Jalebi, was last seen in Amitabh Bachchan and Emraan Hashmi's Chehre.

Ranveer Singh was invited as a guest for the grand premiere of Bigg Boss 15 on Saturday. He promoted his upcoming show The Big Picture and had a lot of fun with host Salman Khan on the reality show.

Meanwhile, also check out some pictures of this year's Bigg Boss house:

Watch this space for more updates on Bigg Boss 15.