83: The One With "Real To Reel" Moments, Shared By Cricket Legends

You just can't miss the anecdotes. 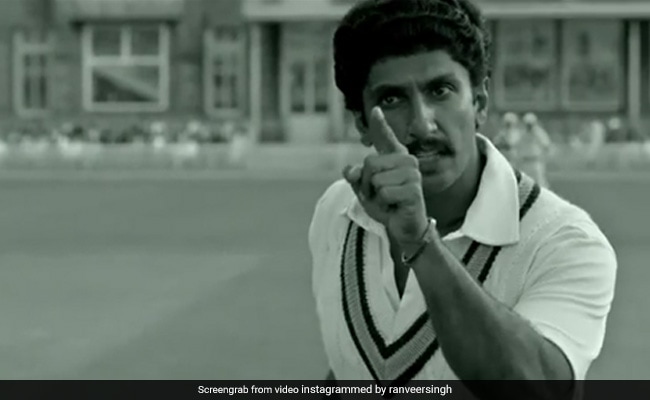 Ranveer Singh in a still from 83. (courtesy ranveersingh)

Kabir Khan's 83 has been hitting all the right notes. The film is bound to send many Indians on a nostalgic trip as it recounts the events of the 1983 World Cup. This is true not just for fans but also for those legends who were part of the historic victory.  From Kapil Dev to Mohinder Amarnath, the former greats have shared anecdotes (mostly funny). Where can we find those? On Ranveer Singh's Instagram timeline. The actor has shared a slew of videos under the “Real To Reel” series.

Curious to know what happens in these videos? In one of them, Kapil Dev has shared the backstory of how Madan Lal got West Indies great Vivian Richards out. Ranveer Singh calls it “the inside story of Madipa's revenge”. FYI: Punjabi singer Harrdy Sandhu plays Madan Lal on screen.

This wasn't the only "Real To Reel" video on Ranveer Singh's list. He added one more clip where Sandeep Patil recalled Kapil Dev's fascination with the English language. The former batsman and medium-pace bowler stood beside Ranveer Singh on a stage and shared the way Kapil Dev loved to give spirited speeches in English when the team was on a tour. Seems normal, right? But it's not because English wasn't Kapil Dev's thing.

The video was interspersed with a scene from the movie. In 83,  Ranveer Singh, as Kapil Dev,is speaking to the team in English and everyone looks puzzled. This scene and Sandeep Patil's recollection did send fans into peals of laughter. Ranveer Singh wrote in the caption, "Language nahi emotions ko samjho (Understand the emotion, not the language)!"

It's time for Krishnamachari Srikkanth's fun tale. He remembered the day when Kapil Dev claimed they would win the match against West Indies. Team members thought that the captain had "gone mad." Praising Kapil Dev, Srikkanth added, "We won the World Cup because of one man. The man who had so much self-belief - Kapil Dev."

Another anecdote on Kapil Dev is waiting for your attention. This one is shared by Balwinder Singh Sandhu, the former medium pacer. During the final against West Indies, Kapil Dev had passed some bowling tips to Balwinder Sandhu and said, “Boundary nahi jaani chahiye. Maine fielding lagai hai - There, There and There. [The ball shouldn't go towards the boundary. I have set the field - there, there and there.” Well, to know what happened next, you must take a look at the clip here:

Which one is your favourite?

Disha Patani Makes Our Day Brighter With Her Stunning Selfies