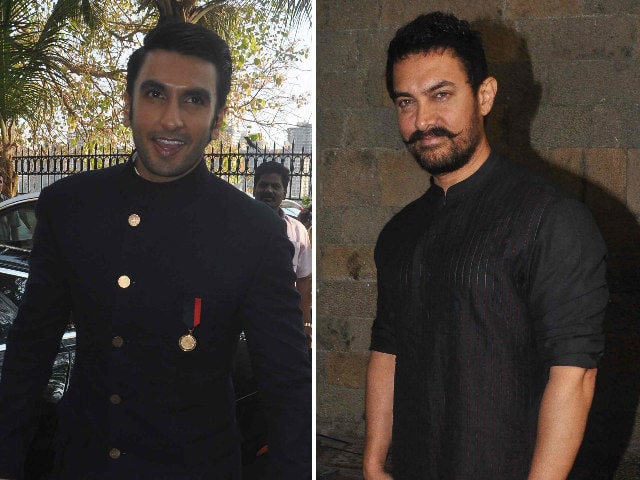 Ranveer Singh and Aamir Khan photographed at an event in Mumbai.

Mumbai: Bollywood actor Ranveer Singh said that he is keen to watch superstar Aamir Khan's upcoming sports biopic Dangal as it chronicles a story worth telling.

The film, directed by Nitesh Tiwari, who also directed Bhootnath Returns stars Aamir in the role of Mahavir Singh Phogat, who taught wrestling to his daughters Babita Kumari and Geeta Phogat.

Ranveer was interacting with Aamir during a session on the sidelines of Lokmat's Maharashtrian of the Year award on Friday and said nobody is prepared to handle what is coming with Dangal.

"I don't think anybody is prepared for what is coming. Dangal, sir, I am really looking forward to. What a wonderful story, the way you approach the role with your physical transformation and everything. It is really a story worth telling. I am really looking forward to the film," he said. (Also Read: What Aamir Khan is Doing With His XL-Sized Clothes)

The PK actor, who had put on weight for his role in the film, and has now lost more than 13 kilos, replied, "Fingers crossed. Let's hope it goes well, I am trying my best."

The 30-year-old Bajirao Mastani actor was all praise for Aamir and said he hopes to be like the 3 Idiots star someday.

"I really hope to be like you someday, sir," said Ranveer.

"By that I mean, something happened in the year 2000. The kind of films that Aamir was putting out was not only immensely entertaining and big hits. But they always had embedded in them a message and somehow acted as a catalyst for social change," he added.

"Taare Zameen Par changed my life. I happened to see that film with my father and believe me our relationship changed after that shared experience. I was in a similar situation. I was from a business family, not wanting to follow the business and instead wanting to be an artist and that really went a long way," he said.