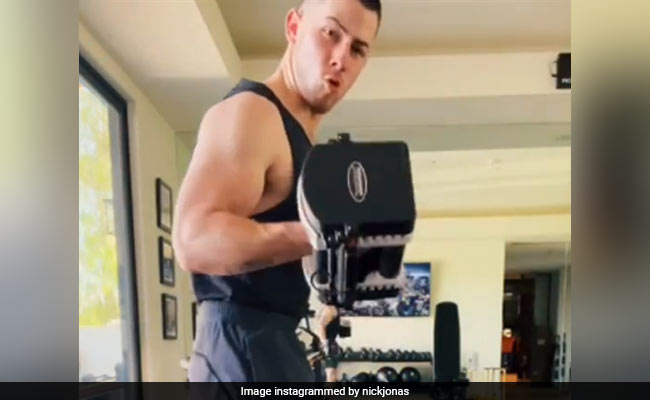 Nick Jonas in a still from his video (courtesy nickjonas)

Ranveer Singh, why do you do this? Nick Jonas and Ranveer Singh run a mutual admiration club - have you seen their comments on each other's posts lately? Recently, Nick Jonas wanted to get hold of a customised Nutella jar with Ranveer's name on it and now, Ranveer is a fan of Nick Jonas' dole shole. On Wednesday, Nick Jonas posted a work out video of himself set to the TikTok tune of Pumped by Valentino Khan. The 28-year-old singer can be seen flexing with huge adjustable dumbbells in the video. Ranveer Singh, who too is a fitness enthusiast, sneaked in this desi comment on Nick Jonas' post: "Oho, Jiju! Dolle-Sholle."

We wonder if Nick Jonas will be asking Priyanka Chopra to help him understand Ranveer's comment.

Meanwhile on Monday, this happened. "I'm gonna enter. I'm hoping I get one of those custom RANVEER jars," Nick wrote on one of Ranveer's posts about winning customised Nutella jars. 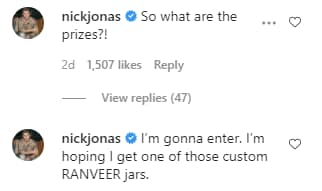 Nick Jonas is one third of the band Jonas Brothers and is the star of Jumanji films. He will next be seen in adventure thriller Chaos Walking. Meanwhile, Ranveer Singh has films such as '83 and Jayeshbhai Jordaar ready for release and Cirkus in the line-up.