Ranveer Singh's "Monday Motivation" Mantra Summed Up In A Post 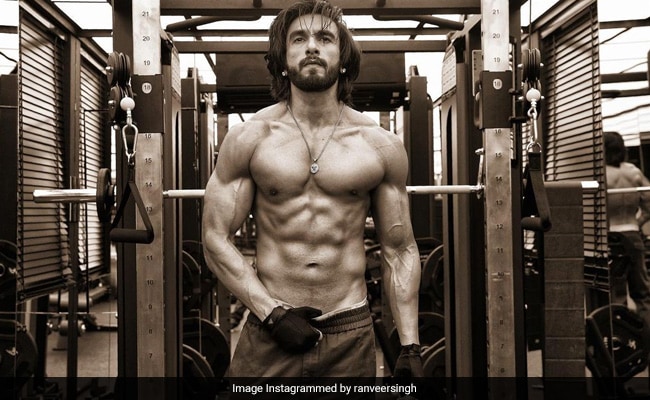 Ranveer Singh and his Monday morning gym pics are now a tradition that all of his fans on the Internet look forward to. Keeping up the streak of dropping some jaw-dropping images of his ripped physique, Ranveer Singh shared two more pictures of himself at the gym. This time around, the actor is seen flaunting his abs and his biceps looking like the quintessential Bollywood superstar. Sharing the photos, Ranveer Singh wrote, “The process is the prize,” with the hashtag “Monday motivation”. Reacting to the post, singer Raja Kumar said, “Bruh,” while designer Manish Malhotra left fire emojis.

A few weeks ago, Ranveer Singh sent the Internet into a tizzy when he dropped a few pictures of himself flexing his biceps and triceps. With his hair tied up in a man bun and wearing his cool gym clothes, Ranveer Singh said, “Shut up and grind.” As usual, the hashtag “Monday motivation” made an appearance. In the comments, actor-model Dino Moreo said, “Izzz nizzzzeeee. Where (are) you grinding bruh?” Manish Malhotra reacted with fire emojis.

Before that, Ranveer Singh shared another set of gym pictures of himself sweating it out like a boss. Sharing the pictures, in which the actor looks as fit as ever, he said, “Born to kill…Built to last.”  Reacting to the post, Varun Dhawan said, “Lean machine.” Anil Kapoor reacted with a fist bump emoji and singer Aditi Singh Sharma wrote, “Swag muffin.”

Ranveer Singh is awaiting the release of his new film 83, based on India's historic win at the 1983 cricket world cup. He will be essaying the role of captain Kapil Dev in the film. His other projects include Rocky Aur Rani Ki Prem Kahani and Jayeshbhai Jordaar.