Rannvijay Singha married Prianka in April 2014 and they welcomed their first child, Kainaat in January 2017 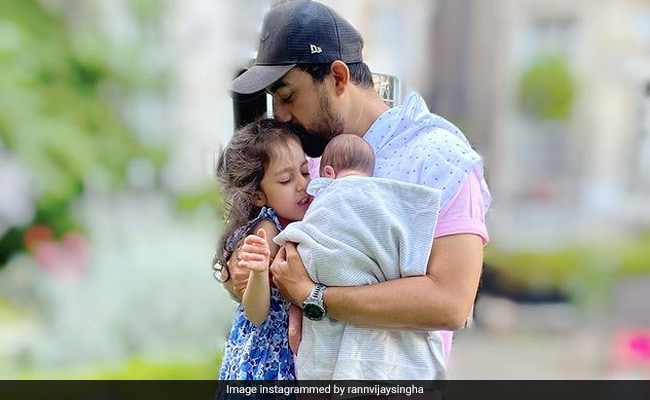 World, say hello to Rannvijay Singha and Prianka Singha's son Jahaanvir. After their son's birth earlier this month, the couple shared a picture of him and they revealed that they have named him Jahaanvir. They shared similar pictures on their respective Instagram profiles. The super cute picture features Rannvijay with his baby boy and daughter Kainaat. Sharing the picture, Rannvijay captioned the post: "#kainaat and #jahaan , #myuniverse and #myworld , #merikainaat and #merajahaan." Meanwhile, Prianka captioned her post: "My world, my universe and my life. Welcome to the family Jahaanvir Singh Singha."

Mom-to-be Neha Dhupia, who has worked with Rannvijay in Action Replayy and Roadies, left a few heart emojis in the comments section of his post. Sunny Leone, who co-hosts Splitsvila with Rannvijay, wrote: "So, so sweet Rann! God Bless you all."

The couple announced their pregnancy in March this year. Posting a picture with his wife Prianka and daughter Kainaat, the actor captioned the adorable picture: "Missing the three of you so much." This is the post we are talking about:

Rannvijay Singha is best-known for hosting television reality show MTV Roadies. He made his Bollywood debut with the 2009 film Toss: A Flip of Destiny. He also featured in Bollywood films such as London Dreams, Action Replayy and 3 AM. Rannvijay Singha is seen hosting television reality show Splitsvilla 13 alongside Sunny Leone. Last year, the actor featured in Zee5's web-series Forbidden Love. He also starred in Netflix's Mismatched, starring Prajakta Koli and Rohit Saraf in the lead roles.

Viral: What Sumona Chakravarti Posted After Being MIA From The Kapil Sharma Show Pics