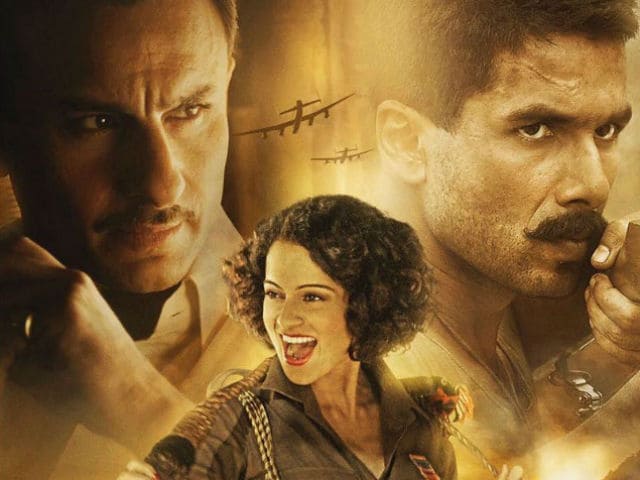 Rangoon will release on February 24

New Delhi: Shahid Kapoor, Kangana Ranaut and Saif Ali Khan's film Rangoon is one of the most-awaited films of the year. The Vishal Bharadwaj-directed film is set during World War II. Kangana, 30, plays Miss Julia, a filmstar and Saif, 46, features as a producer and her mentor, who is in love with Kangana's character. Shahid, 35, plays a soldier named Nawab Malik, who also falls for Miss Julia. The period drama is an intense love triangle, shot extensively in Arunachal Pradesh. The makers of Rangoon have released a video which shows how challenging it was to shoot the film in the treacherous terrains of Arunachal Pradesh. In the video, Kangana reveals how the cold weather is making it difficult for them while Shahid says that Rangoon's shoot is the most difficult schedule of his so far.

See the behind-the-scenes footage from Rangoon:

#Rangoon takes you on a journey to explore the unexplored beauty of #ArunachalPradesh. https://t.co/dtujexHz01

Director Vishal Bhardwaj, who is prepping for the release of the film said that Rangoon is less a war film and more a love triangle. "Rangoon is a love triangle set in the era of the Second World War. We have tried to create the ethos of the era but it's a work of fiction," said Mr Bharadwaj to news agency IANS. On Kangana's playing Miss Julia, Mr Bharadwaj told IANS, "It certainly doesn't follow the life of any of the various actresses of that era be it that of Fearless Nadia, Miss Zebunissa, Miss Padma or Ramola. Rangoon is a period drama that has a love triangle in its centre, its not at all a biopic."

He has worked with Saif and Shahid before. This is the first time Kangana Ranaut and Mr Bhardwaj are collaborating. Saif Ali Khan has featured in Mr Bharadwaj's 2006 film Omkara and Shahid Kapoor in Kaminey and Haider.

Promoted
Listen to the latest songs, only on JioSaavn.com
Rangoon releases on February 24.