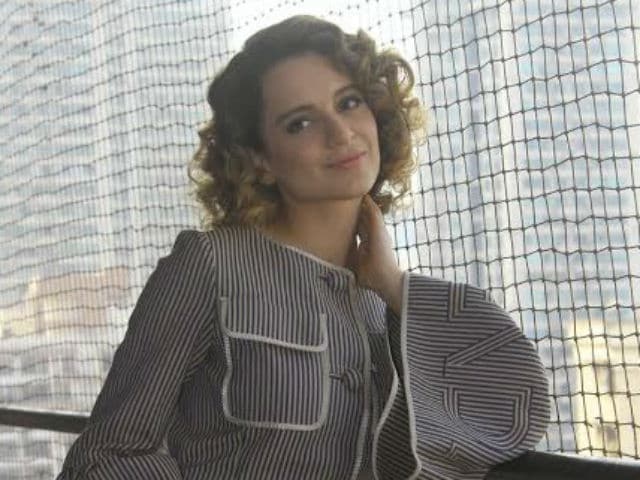 New Delhi: Actress Kangana Ranaut, who will be seen as Miss Julia, a 1940s filmstar in Vishal Bharadwaj's war drama Rangoon said that the director has captured her real beauty in the film, reports news agency PTI. "Vishal Sir has a habit of reinventing his actors. Before this, no one has explored my beauty on screen. I was given a fake nose in Revolver Rani and a set of fake teeth in Tanu Weds Manu Returns." Rangoon also features Saif Ali Khan and Shahid Kapoor. The period drama is an intense love triangle. Saif, 46, plays a producer and Kangana's mentor, who is in love with her while Shahid, 35, will be seen as a soldier named Nawab Malik, who also falls for Miss Julia.

Kangana, 30, further told PTI, "Throughout the look test, Vishal Sir kept saying, 'Make her look prettier than she already is'. We have kept the look very authentic, including the curls in my hair."

The film's latest song on Kangana, Tippa, was released on Thursday. The song gives a detailed account of Miss Julia's trip to Burma on a train. The song was shot in Arunachal Pradesh, and a rail track was created to shoot the number. "The phone network was really bad. It got especially difficult when I had to deal with a legal issue back home in Mumbai. We had to drive 20 kilometers to receive calls," Kangana told PTI.


The period drama film is set in World War II and has been extensively shot in the treacherous terrains of Arunachal Pradesh. Last week, the makers shared the behind-the-scenes footage of the film.

#Rangoon takes you on a journey to explore the unexplored beauty of #ArunachalPradesh. https://t.co/dtujexHz01

Promoted
Listen to the latest songs, only on JioSaavn.com
Kangana Ranaut has collaborated with director Vishal Bhardwaj for the first time while Saif Ali Khan has worked with Mr Bharadwaj in Omkara and Shahid Kapoor in Kaminey and Haider. Vishal Bharadwaj, who is currently post-producing the film, says that Rangoon is less a war film and more a love triangle. The film releases on February 24.