Ranbir Kapoor And Alia Bhatt Wedding: "You Are Now My Son-In-Law," Karan Johar Writes For Ranbir

Ranbir, Alia wedding: "This is such a beautiful life step," wrote Karan Johar 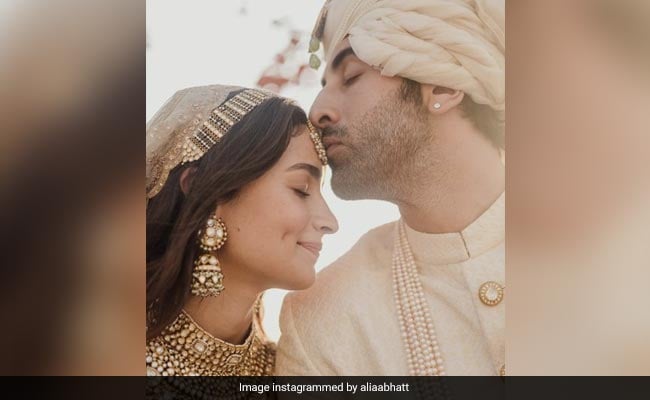 Alia Bhatt's mentor Karan Johar, who was one of the few Bollywood attendees at the Alia Bhatt-Ranbir Kapoor wedding on Thursday afternoon, shared an adorable post for the newlyweds on his Instagram profile. He shared a picture of the star couple and wrote this for Ranbir: "You are now my son-in-law. " He wrote in his post: "It's days like this that we live for... Where there is the most beautiful blend of family, love and absolute emotion..... overwhelmed and so full of love in my heart... my darling Alia Batt, this is such a beautiful life step and my love and blessings go with you everywhere ... Ranbir ! I love you... now and forever! You are now my son in law..badhai ho and here's to decades of khushiyaan."

Alia Bhatt and Ranbir Kapoor got married in the presence of family and a few friends on Thursday. Alia Bhatt shared pictures from the wedding and wrote: "Today, surrounded by our family and friends, at home ... in our favourite spot - the balcony we've spent the last 5 years of our relationship - we got married. With so much already behind us, we can't wait to build more memories together... Memories that are full of love, laughter, comfortable silences, movie nights, silly fights, wine delights and Chinese bites. Thank you for all the love and light during this very momentous time in our lives. It has made this moment all the more special. Love, Ranbir and Alia."

Karan Johar gave Alia Bhatt her big Bollywood break with the 2012 film Student Of the Year and worked with her many projects backed by Dharma Productions, including 2 States, Humpty Sharma Ki Dhulania, among many others. Karan Johar has also worked with Ranbir Kapoor. He directed the film Ae Dil Hai Mushkil in 2016. Ranbir's mom Neetu Kapoor will also star in a project backed by Dharma Productions titled Jug Jugg Jeeyo.

Alia Bhatt and Ranbir Kapoor's first film together - Brahmastra too has been backed by Karan Johar. The film will release in September this year.