Ramayan Fans Upset As They Think Episodes Were Edited. A Clarification On Twitter

The CEO of Prasar Bharati, in a tweet on Saturday, said Doordarshan didn't chop off portions of Ramanand Sagar's Ramayan. 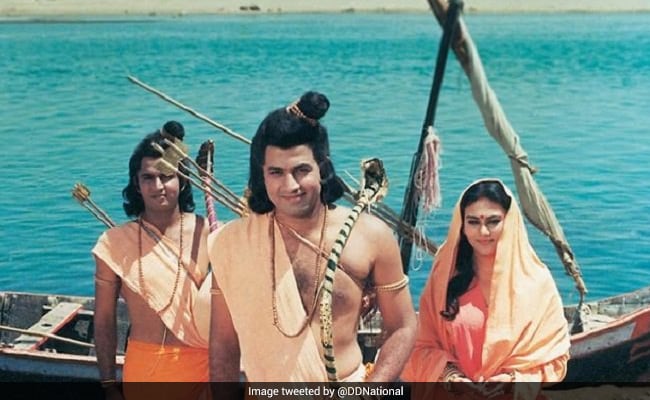 A still from Ramayan (courtesy DDNational)

The finale sequence of Ramanand Sagar's Ramayan was divided into episodes and aired in the last week, which however, prompted netizens to point out that some "important" segments of the epic were missing in the episodes shown on Dordarshan. Ardent fans of the show particularly noticed that a sequence featuring Ravan and his brother Ahiravan wasn't shown and lodged their complaints on Twitter only to get a clarification from Shashi Shekhar, the CEO of Prasar Bharati. In a tweet on Saturday, he said Doordarshan didn't chop off portions of Ramanand Sagar's Ramayan: "There have been no cuts, they were not part of the original production."

In a separate tweet, he added that not every detailed segment of an epic like Ramayan could be included in a television script: "The beauty of our epics are the many stories, side-stories and interpretations. Not every nuance can possibly make it into a single television script but perhaps leaves the door open for future productions."

The beauty of our epics are the many stories, side-stories and interpretations. Not every nuance can possibly make it into a single television script but perhaps leaves the door open for future productions https://t.co/od8HaoBANs

In a final tweet, the Prasar Bharati CEO added that Sunday's episode was going to be special with the entire finale sequence: "The entire finale of Ramayan starting with morning's episodes of slaying of Ravan to the episodes of tonight marking return of Lord Rama to Ayodhya will be repeat telecast tomorrow - accordingly tomorrow morning's repeat telecast starting at 9 am will be more than 2 hours long."

Meanwhile, here's what a grieved Twitter had to say about the finale episodes of Ramayan before Sunday's mega-episode was aired:

@DDNational I think Episode of Ahiravan and Mahiravan is missing from telecast of Ramayana. Either there no such episode in Ramanand Sagar's Ramayana or this is mistake or you cut that episode to end early. This is very important episode in Ramayan.

@DDNational I don't understand why do you cut scenes and show repeat telecastes. We have many days why are you showing Uttar Ramayan only once in a day? Why not 2 episodes per day. Also ahiravan, laxman-ravan etc. Scenes were cut.#Ramayan#NoToRepeatTelecast

@DDNational why did you guys cut Ahiravan episode? It was one of the important lessons. Please telecast it. #Ramayan#RamayanOnDDNational#DDNational

Given Ramayan's massive viewership, Doordarshan began airing the follow-up show Luv Kush, Sunday onwards. Just like Ramayan, Luv Kush was also written, directed and produced by Ramanand Sagar and is based on the last book of Ramayan - Uttar Ramayan - which documents the happenings following Ram's coronation and the lives his twins Luv and Kush.