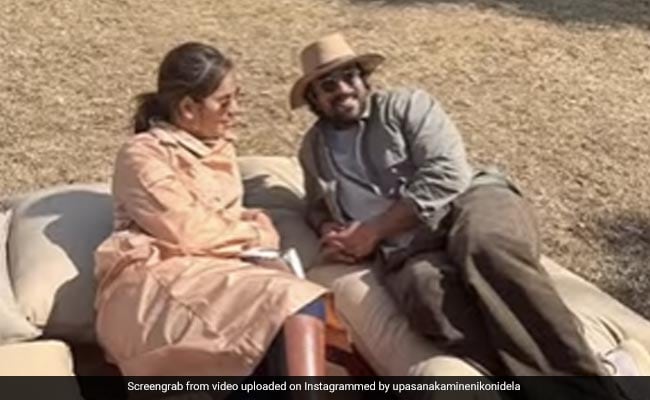 RRR star Ram Charan is currently vacationing with his wife Upasana in Africa and it seems like the couple is having too much fun there. On Thursday, Upasana shared a glimpse of her trip in Africa by posting a video on Instagram. In the video, the couple can be seen spotting various wild animals in Africa and also making some cute poses for the camera. Sharing the video, Upasana wrote, "Untamed Africa" with a red heart and an earth emojis. Both Ram Charan and Upasana can be seen sharing a laugh and hugging a tree to pose for a picture, while the video also shows lions and cubs playing in the jungle.

Check out a glimpse of Upasana's amazing trip with husband Ram Charan:

A few days ago, Ram Charan too shared a video of himself from his trip to Africa with a similar caption as his wife. In the video, the stunning actor can be seen driving a jeep, making eggs and clicking pictures of the wild animals around him in the Safari.

Sometime back the couple also shared a few pictures and videos from Japan. Ram Charan visited Japan with his RRR team, which included Jr NTR and filmmaker SS Rajamouli for the release of their film RRR. Upasana, who also accompanied her husband to Japan, shared a few pictures from her visit on her Instagram handle.

Ram Charan also shared a very cute video of himself with his wife Upasana and co-star Jr NTR among others, crossing Tokyo Drift, Shibuya.

Ram Charan was last seen in SS Rajamouli's RRR, which became a blockbuster around the globe. The film also featured Jr NTR, Ajay Devgn and Alia Bhatt in the lead roles. Ram Charan was also seen in the film Acharya along with his father Chiranjeevi, which didn't do well at the box office.

Samantha Ruth Prabhu Returns To Work After Myositis Diagnosis. See What She Posted