"Japan is special - The people , the culture, the love & respect they have for everyone is unmatched," wrote Ram Charan 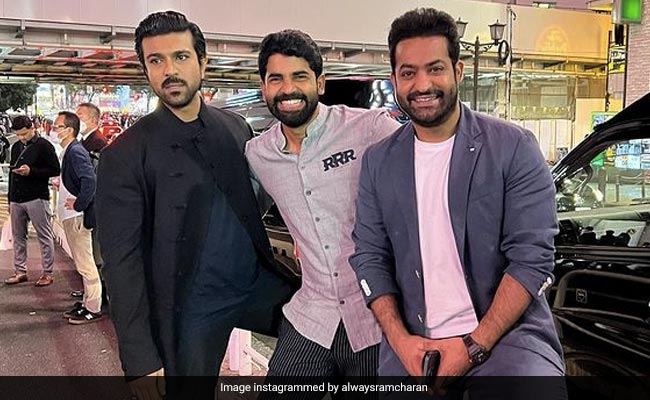 Ram Charan, who jetted off to Japan for the release of their film RRR, has been keeping their Insta family. The actor was accompanied by his RRR co-star Jr NTR, director SS Rajamouli and other members of the RRR Team. On Wednesday, Ram Charan shared pictures on his Instagram handle along with a long note summing up his experience in Japan. In the first image, he can be seen posing with SS Rajamouli amid the beautiful view, while in the next, he can be seen posing with Jr NTR. Along with the photos, he wrote, "Missed being home for Diwali, but how could I miss a once in a lifetime chance of experiencing love for RRR from the Japanese audiences. Japan is special - The people , the culture, the love & respect they have fr everyone is unmatched."

He added that spending time with co-star Jr NTR was fun. He wrote, "This is just the beginning... Love you soo much @ssrajamouli Garu for this experience Spending quality time together again with brother @jrntr was soo much fun...Thanks to our distributor KeizoKabata Big shout out to @sskarthikeya and team!!"

On Diwali, Ram Charan shared an adorable picture with his wife Upasana Kamineni. He also shared a solo picture of himself amid the beautiful backdrop. In the caption, he wrote, "Have a great evening this Diwali !!!"

RRR, which also starred Alia Bhatt, Ajay Devgn and Shriya Saran in pivotal roles, was a massive success in India. The film was released across the globe in Hindi, Tamil, Telugu and Malayalam simultaneously. Almost two months after its theatrical release, the film began streaming on Netflix and according to the OTT giant, RRR (Hindi) became "the most popular Indian film on Netflix around the world" in June.