Rakul Preet Singh summed up her holiday mood with this post: "Smell the sea, feel the sky, let your soul and spirit fly." 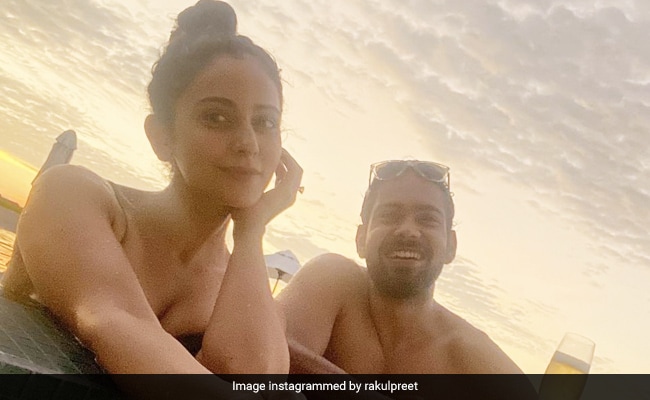 Actress Rakul Preet Singh has switched on vacation mode and flown all the way to the Maldives to have a fabulous time. The 30-year-old actress is chilling in the beach destination with her family - parents and brother Aman Preet Singh. Since touching down in the Maldives, Rakul has been sharing envy-inducing glimpses of her vacation. She's also checked in on Instagram just a few times to post some of her favourite memories so far - in her recent photo, she can be seen chilling with her partner-in-crime - brother Aman - at the resort's infinity pool. "Sunset, pool and this fool," she captioned the photo, trolling her brother.

Rakul Preet Singh summed up her holiday mood with this post: "Smell the sea, feel the sky, let your soul and spirit fly." Meanwhile, we can't take our eyes off that spectacular view.

As soon as Rakul checked into her Maldives villa, she went for a swim, glimpses of which she shared on her Instagram story, which were further shared by fan-clubs.

Rakul Preet Singh is best known for films such as Marjaavaan, De De Pyaar De, Aiyaary, Yaariyan, Manmadhudu 2, among others. She will next be seen in an untitled cross-border love story. The film stars Arjun Kapoor in the lead role. It also features John Abraham and Aditi Rao Hydari in pivotal roles. Rakul Preet Singh recently signed Mayday. The actress will play the role of a pilot in the thriller-drama, which will be directed and produced by Ajay Devgn. The film also stars Amitabh Bachchan.