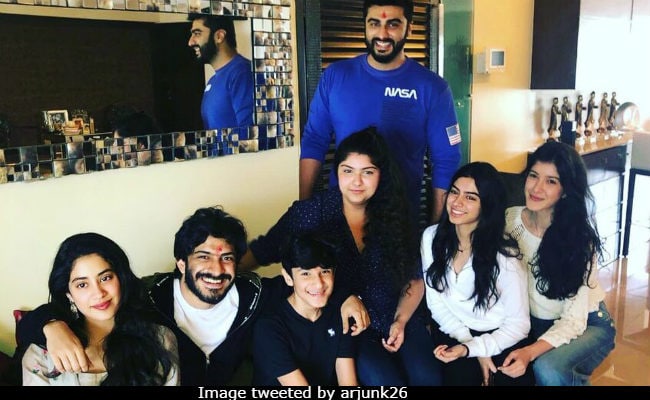 Arjun Kapoor, who celebrated Rakhi 2018 with sisters Anshula, Janhvi and Khushi Kapoor on Sunday, shared wonderful photos from the Kapoor fam-jam on social media. It was a full house at the Kapoor residence but sisters Sonam and Rhea Kapoor were really missed. Spotted chilling with Arjun Kapoor were Janhvi and Khushi - Boney Kapoor's daughters with Sridevi. Anshula also joined the gang and so did Sanjay Kapoor's children Shanaya and Jahaan Kapoor. Sonam's brother Harshvardhan Kapoor also made a rare appearance in the family photos with parents Anil and Sunita Kapoor. Arjun Kapoor, who is known for his amazing sense of humour, zeroed in one click from the celebrations as his favourite.

"I have specifically chosen this one because I look the best in this one!" he wrote.

I have specifically chosen this one because I look the best in this one !!! pic.twitter.com/OmkwwwoLRe

Arjun however, did not give up the chance to troll chachu Anil Kapoor as he wrote: "None of us have an answer why Anil Kapoor has worn sunglasses in a family picture. Maybe he thought we are his fans." Lol.

None of us have an answer why @AnilKapoor has worn sunglasses in a family picture. Maybe he thought we are his fans. pic.twitter.com/VeXuMHFMW3

Sunita and Sanjay Kapoor also added to the album:

Earlier on Sunday, Anshula and Arjun exchanged adorable rakhi wishes on Instagram with a throwback photo, starring much younger versions of the brother-sister duo. Anshula and Arjun are Boney Kapoor's children with his first wife Mona. "Happy Rakhi to this trendsetter with the ugliest fanny pack. Even the parrot is questioning your judgement here, but I'm thankful that you've upped your fashion game since the 90s. Love you to infinity Bhai, thank you for being the best brother a girl could ever want, you're one in a zillion and you know it," wrote Anshula while Arjun replied: "You're lucky you have such an amazingly warm, genuine, funny cool, sorted and fashion forward brother! Ya and you're not a shabby sister yourself too (actually you're the best)."

I have a parrot on my shoulder & guess what she's confused by !!! My fashion choices... Ya I'm sorry that yellow Fanny pack is mine & you ain't getting it no matter how hard you stare !!! @anshulakapoor, happy rakhi to you !!! You're lucky you have such an amazingly warm, genuine, funny cool, sorted & fashion forward brother !!! Ya and you're not a shabby sister yourself too (actually you're the best) !!! #findingfanny literally

After Sridevi's sudden death in February this year, Boney Kapoor's children have visibly come closer to each other. Speaking at an event earlier this month, the filmmaker said: "The way they (Anshula and Arjun) have accepted Janhvi and Khushi that has made me feel very relieved. My all four children are my strength," reported PTI. In May, Karan Johar interviewed Janhvi for Vogue magazine, in which he said that after Sridevi's death "the family has actually come together."

Was you Raksha Bandhan celebrations as awesome as the Kapoors? Tell us in the comments below.