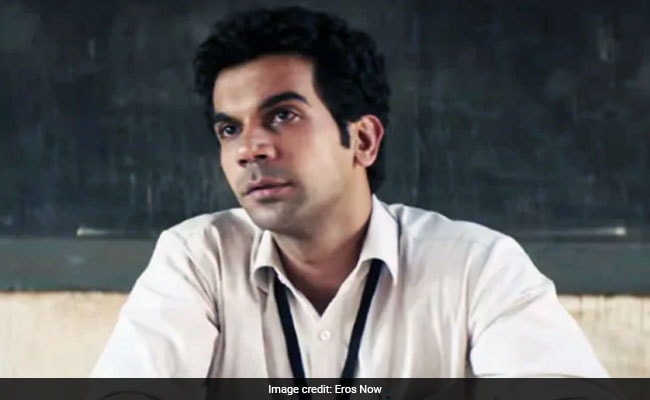 Rajkummar Rao's in a still from Newton

Rajkummar Rao's rise to stardom was not an overnight phenomenon. The 34-year-old actor believes that in a career spanning over eight years, Shahid, "Trapped, Newton and Bareilly Ki Barfi played a crucial role. The actor told news agency PTI that the "humanness" in these films is something which he "loved" the most. "The characters in these films were real in a way. Though Shahid was the only true story, what happened in Trapped can happen to anyone. And I am sure there are people like Newton and there are boys who are naive, sweet and rowdy, like my part in Bareilly Ki Barfi . The humanness is something I loved," PTI quoted r as saying.

When the director of Shahid Hansal Mehta narrated him the script, Rajkummar Rao was "moved". To know more about Shahid, he also spent time with his family. "Hansal sir narrated me his story and on a human level, I was moved that there was somebody like him. That film also changed me as a person. He spent a lot of time with Shahid's family, trying to know him. There was such variation in his life starting from being a victim, to briefly going to a terrorist camp, to landing in Tihar Jail and then becoming this human rights lawyer. It was a fascinating life. What was it that was driving him to go to these extremes? I tried to achieve that," Rajkummar told PTI Shahid was a biopic based on the life of lawyer and human rights activist Shahid Azmi who was assassinated in 2010. Rajkummar's performance in the film fetched him his first National Film Award.

In Trapped, Rajkummar Rao played the role of a man, who is accidentally locked in a newly constructed building. Portraying the character was a massive challenge since he starved himself for several days for playing the role. "I lost seven kgs in 18 days as I did not eat anything for 15 days. The recognition and love that I got for this film was immense," he added.

Newton, which released last year, is also very special for the actor since he believes that it paved way for content-driven cinema. "Newton was a super hit in the conventional way so it inspired a lot of people to make content-driven cinema. There is a market for such films and people want to watch them. Newton has given a lot to our cinema." Newton was India's official entry to the Oscars.

Rajkummar's role in Bareilly Ki Barfi surprised the audience. Rajkummar was cast in a supporting role in the film, which fetched him a Filmfare award as well. "It was a good shock for people to see me in that avatar. Before this film, I was doing serious, intense parts and people liked it. It was like playing two different parts in one film as there is so much contrast in my character of Pritam Vidrohi. His one side is rowdy while the other is completely opposite. I was very nervous about the role as I did not want to go overboard with the portrayal," Rajkummar added.

(With PTI inputs)
Promoted
Listen to the latest songs, only on JioSaavn.com