Rajkummar Rao Is Patralekhaa's Lockdown Hairstylist. Here's What She Posted

Patralekhaa recently enjoyed a salon treatment at home, courtesy Rajkummar. She shared a video, in which he can be seen trimming her hair 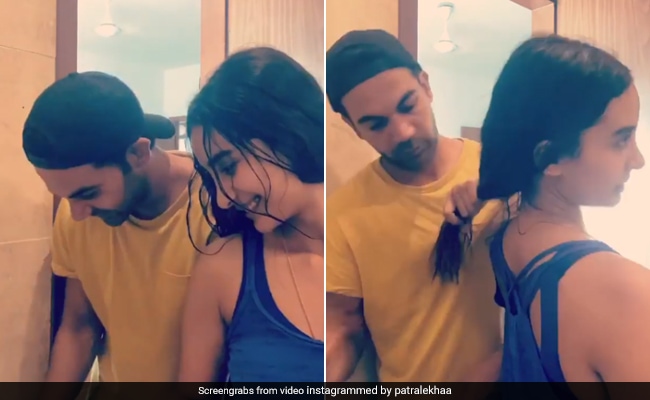 Rajkummar Rao and his girlfriend Patralekhaa have been setting major couple goals. Quarantine together in lockdown, they are finding mention in each other's posts a little more than usual. Patralekhaa recently enjoyed a salon treatment at home, courtesy Rajkummar. She shared an adorable video, in which the Newton actor can be seen trimming her hair like a professional. In the short, simple and honest video, the couple can be seen occasionally giggling at their joint effort - Patralekhaa contributed by holding her hair while Rajkummar worked with the scissors. "Jahaan chah... wahaan raah...," she captioned her post, which is the Hindi version of the saying "If there's a will, there's a way."

Couples styling each other's hair during the lockdown became a trend of sorts after Anushka Sharma worked her magic wand (read kitchen scissors) on Virat Kohli's hair. Anushka had shared an adorable video, in which Virat, while getting his hair trimmed, said: "This is what quarantine does to you. We allow things like this to happen. Getting a haircut with kitchen scissors! Can you see this gradual fade? Beautiful haircut by my wife."

Sonam Kapoor and Anand Ahuja, currently spending their days together in New Delhi, also resorted to the same option. With help from Anand's hairstylist, Sonam gave his husband a nice and clean haircut and he approved!

@anandahuja via his insta stories

Neena Gupta is also proud of her hairstyling skills but she won't do it for free, you know.

India is currently in lockdown mode till May 3 to battle the coronavirus pandemic.