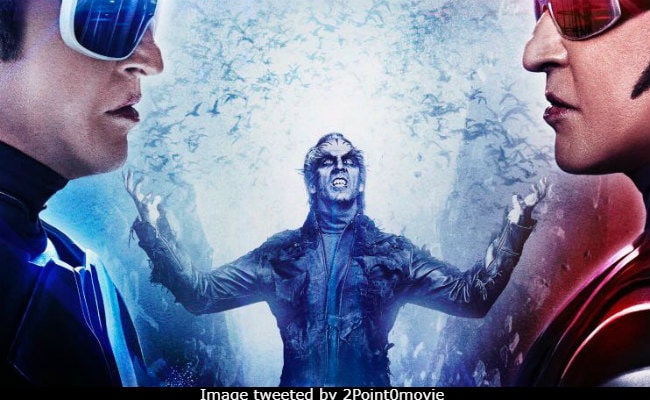 Akshay Kumar on a new poster of 2.0 (courtesy 2Point0movie)

Gear up, folks and clear your calendars for next week as the teaser release date of Rajinikanth's much awaited 2.0 is almost here! September 13th is the lucky date. Akshay Kumar, who plays the antagonist in the film, made the big announcement on Twitter and sent the Internet into some sort of an overdrive. Sharing a brand new poster of the film, Akshay Kumar wrote: "Prepare for 2.0! Teaser out on September 13, 2018." Yes, yes, yes! "Oh! Wait is over," read a tweet in the comments section while another added: "Finally, September 13!" Akshay Kumar plays the antagonist - a mad scientist named Dr Richard - in the film. 2.0 is a much awaited film not only for Rajinikanth fans but also for the true blue Bollywood-buffs as this marks Akshay Kumar's first project with Thalaivar.

Meanwhile, the makers of 2.0 also confirmed the news with new posters of the movie, which clearly delighted netizens to a great deal!

Prepare for #2point0
Experience the teaser in 3D from 13th September pic.twitter.com/RBpd3izwLQ

In another news, filmmaker Karan Johar has been roped in to present the in collaboration with Lyca Productions - KJo's production house will most likely present the Hindi version of the film. Sharing the teaser release date, 46-year-old filmmaker tweeted: "I am exceptionally proud and honoured to present the mega and mammoth cinema experience - Shankar Shanmugham's exceptional vision is soon coming your way. Watch this space for more!" Karan Johar's Dharma Productions presented the Hindi version of SS Rajamouli's Baahubali 2 last year, which redefined box office history not just by scoring over hundred crores on its first day but also by setting several records which remain unbeatable till date.

I am exceptionally proud and honoured to present the MEGA and MAMMOTH cinema experience - @shankarshanmugh's EXCEPTIONAL vision is soon coming your way. Watch this space for more! #2Point0@apoorvamehta18@rajinikanth@akshaykumar@LycaProductions@DharmaMovies@arrahmanpic.twitter.com/V6aerQIPTg

Directed by Shankar, 2.0 is a sequel to Rajinikanth's 2010 film Enthiran, in which the megastar played the dual roles of scientist Dr Vaseegaran and his creation robot Chhiti. This year, Rajinikanth will fight a bird-man like antagonist named Dr Richard, played by Akshay Kumar.