Rahul Khanna And Puppies. See Pic Here - You Can Thank Us Later

"Wanted to wish you a wagtastic Wednesday!" wrote Rahul Khanna 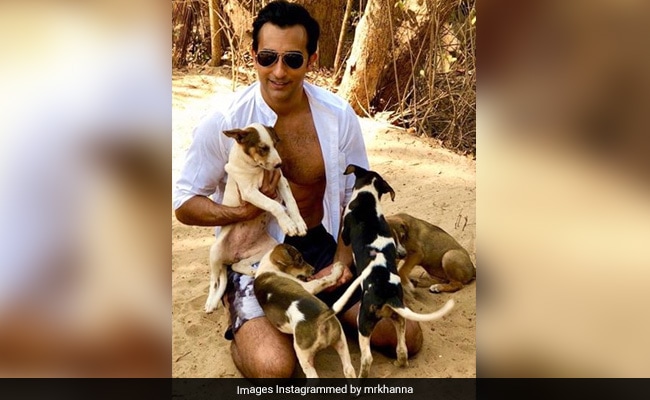 Rahul Khanna's 'wagtastic Wednesday' post is the perfect fix to your mid-week blues. In case you are wondering what we are talking about, it is Rahul Khanna's Wednesday special post. The 47-year-old actor shared an adorable throwback picture of himself, in which he can be seen playing with a litter of puppies and it appears that his play of words with the 'wagtastic Wednesday' is a reference all the tail-wagging that happened. In the photo, the actor is his usual charming self in a white shirt and shorts as he holds one puppy in his arm while the others try to climb up on his lap. "Wanted to wish you a wagtastic Wednesday," Rahul Khanna captioned the photo. He accompanied his post with hashtag "#tb" (throwback).

Wanted to wish you a wagtastic Wednesday! #tb

Rahul Khanna's fans also flooded his post with comments such as "speechless," "adorable," "gorgeous," "super cute" and many more.

The Wake Up Sid actor often trends for his shirtless selfies. You will know why when you'll check out his posts. Previously, Rahul Khanna posted a selfie with a furry friend and wrote: "A kiss on the cheek may be quite continental but doggos are a boy's best friend! Throwing back to a summer at the beach, not long ago."

A kiss on the cheek may be quite continental, But doggos are a boy's best friend! Throwing back to a summer at the beach, not long ago (with a h/t to Ms. Monroe)! #throwbackthursday #tbt #adoptdontshop

Do you remember his "sweat equity" and "weekend wallow" posts? If not, take a look:

On the work front, Rahul Khanna, son of late actor Vinod Khanna, made his debut in the film industry with Deepa Mehta's 1999 movie Earth. He went on to feature in the 2003 film Bollywood/Hollywood and the 2009 movie Wake Up Sid. He has also worked in The Emperor's Club, an American film by Michael Hoffman. Rahul Khanna was last seen in Sabal Singh Shekhawat's 2013 film Fireflies.