Radhika Apte Is Playing "Mind Games" With Us And Winning

Radhika Apte had flown to London days before the lockdown was imposed in India. 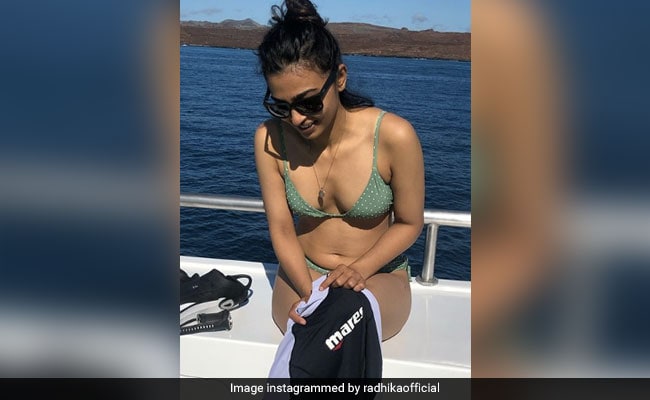 Actress Radhika Apte is revisiting throwback memories or not? Because she's clearly "dreaming of the ocean." In an Instagram post on Tuesday, Radhika shared a photo of hers in a polka dotted bikini with the caption: "Loving the locked down." In the photo, Radhika appears to be getting ready to dive into the deep blue sea. With her post, Radhika is making us daydream about seas and oceans and looks like that's the "mind game" she hashtagged about in her caption. Radhika added "No corona in the ocean," and "socially distant diving desire" in the hashtags. Radhika Apte had flown to London days before the lockdown was imposed in India.

The 34-year-old actress had earlier responded to messages of concern from her well-wishers in an Instagram post, writing she flew to London on a full flight and had a hassle free experience at immigration. "For all the many messages I received from friends and colleagues with concern and curiosity - I'm back in London safely. There was no issue at immigration."

For all the many msgs I received from friends and colleagues with concern and curiosity I'm back in London safely. There was no issue at immigration. It was rather empty and had a wonderful chat with them! The Heathrow express was literally empty and barely anyone at Paddington either. That's all for now! Thank you for all msgs xx Ps. BA flight was full! (though two days ago when I went to India from London it was empty.) More ps. The immigration officers had no information to share regarding UK closing borders yet. #obvs #sillyme #goodtiming #travelinthetimeofcorona Xx

UK, which is among the worst affected countries amid the coronavirus outbreak, is also in lockdown mode. Meanwhile, here's how social isolation is treating Radhika.

Getting blonder by the day #sunbleached #lockdown #cantstophairdancing #longhair #timetochopitoff

Radhika Apte is best known for her roles in Netflix productions Lust Stories, Sacred Games and Ghoul. She is also has critically acclaimed films such as Parched, AndhaDhun, PadMan, Kabali and Shor In The City in her line-up. She was last seen in the English film Liberte: A Call To Spy.