Radhe Shyam Review: Despite His Tremendous Screen Presence, Prabhas Is Reduced To Sub-Par

Radhe Shyam Review: Prabhas and Pooja Hegde are saddled with a screenplay that allows them little room for manoeuvre. The end result is calamitous. 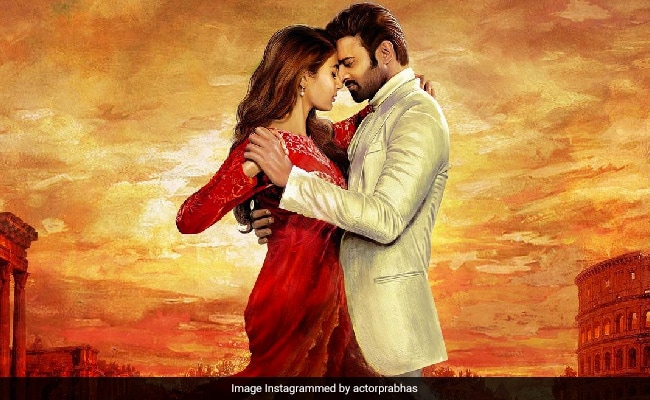 Radhe Shyam: Prabhas and Pooja in the film.(courtesy: actorprabhas)

All pomp and show, Radhe Shyam is a godawfully turgid romantic drama that sucks the air out of the genre with crushing gusts of bombast and pomposity. Prettiness overload and unrelenting obscurantism defeat the film's avowed purpose of asserting that the fate of human beings lies not in the lines on their palms but in the strength of their hands.

Lead actors Prabhas and Pooja Hegde are saddled with a screenplay (written by director Radha Krishna Kumar) that allows them little room for manoeuvre. The duo is forced to play along with their hands tied. The end result is calamitous.

Neither is able rise above the rubble of a film that kicks up a storm in the climax and leaves the hero to fight the raging elements on a sinking ship (in the literal sense and otherwise). They fail to make any emotional connect with the audience but certainly not for want of trying. How far can actors go with platitudes that are not only empty but also confused?

Radhe Shyam, filmed in Telugu and Hindi simultaneously with two separate soundtracks and released nationwide, is projected as a big-budget extravaganza meant to sweep us off our feet. Parts of the film come close to achieving that end. With large portions of it shot in Europe, it is replete with lavish imagery and spectacular visual effects. But not much of what the film serves up delivers the sensory highs that it aims for.

Radhe Shyam is prettified piffle that is sought to be palmed off as an earnest exploration of life and death, destiny and human endeavour, palmistry and science, and love and loss. Cinematographer Manoj Paramahamsa - besides lending a part of his name to a key character in the film - delivers unblemished and impressive compositions all right, but in the absence of a palpable and passable context for all the superficial 'beauty' that is on show, the undeniably good work that he and the visual effects team do is rendered ineffectual.

A voiceover by Amitabh Bachchan on the pyaar-and-kismat dichotomy sets the tone for the 140-minute film that simply does not possess the power to match the gravitas of the narrator's famed baritone. There is no doubt, of course, that Prabhas' screen presence is tremendous but, caught in a milieu that makes little use of what he brings to the table he is reduced to being sub-par.

The climactic stretch of Radhe Shyam lets the star slip into action-hero mode - though he isn't taking on a human villain here - and this is where Prabhas seems far more at home than at any other point in the film.

The male protagonist of Radhe Shyam is a soothsayer who is described in one of the initial sequences as "the Einstein of palmistry" and, in a later scene, as "the Nostradamus of India". In case you aren't suitably impressed by these monikers, the man in question, Vikramaditya, has the temerity to read Indira Gandhi's palm and forecast the advent of the Emergency.

He flees the fallout of the daring forecast and ends up in faraway Rome where he continues to ply his trade with success. In the course of his Italian peregrinations, he espies the beautiful and impulsive Prerna (Hegde) on a train that appears to be carrying no other passenger and is destined for no particular place on the railway map.

The adventurous lady is a doctor who works in a Rome hospital headed by her stern uncle (Sachin Khedekar) who, on his part, is firm in his belief that Vikramaditya is a charlatan. Needless to say, the boy-meets-girl moment does no go waste. Vikramaditya falls in love with Prerna although he never misses an opportunity to assert that he isn't the "relationship type" but the "flirtation-ship type".

No matter what ship the guy is on, it is easy to foresee that neither he nor the film is headed in the direction of a smooth ride. Speaking of rides, one chase, which begins after Vikramaditya has summarily told a reluctant businessman (Jagapathi Babu in a special appearance) that he has no future in politics, ends with the hero throwing himself under what looks like a bus but is subsequently called an ambulance.

Vikramaditya wakes up in a bed in the very hospital that Prerna serves. Where else would he go when the film will have us believe that everything is written on the man's palm? He is quick to point out to the heroine that he is never going to fall in love, marry and settle down because that is what fate has in store for him.

The rest of Radhe Shyam is devoted to proving the hero wrong. Fair enough, but the methods that the film employs are painfully predictable and excruciating tortuous.

Radhe Shyam is a choppy, meandering affair that expends a great deal of time on establishing that Vikramaditya is a master of his craft before deciding to backtrack and change the messaging completely - and confoundingly. It takes the spectre of death and a fearsome tsunami for the change of heart to happen.

The palmist may be good at his job, but life is too precious to be left at the mercy of his prognosis - this is what the film is trying to ntell its audience. The heroine's life - and destiny - become the testing ground for that supposition.

To bolster the argument, Radhe Shyam factors in a cameo for Riddhi Kumar as a young girl who aspires to make a name for herself in the sport of archery. Along the way, Vikramaditya makes a few other spot-on predictions, which strengthen his reputation as a fortune-teller.

The cast of Radhe Shyam includes Jayaram as a hypochondriac who refuses to vacate his hospital bed, Krishnam Raju as the hero's blind perpetually pontificating guru, Bhagyashree in the role of the hero's mother and Kunaal Roy Kapur as the hero's best friend who stands in for him during his long absences from home.

Does any of them leave any imprint at all on the film? Well, they aren't supposed to because the focus of Radhe Shyam is firmly on the mumbo-jumbo that masquerades as sweet-nothings between the lovers who wallow in a concoction that dangles between infantilism and fatalism.

Radhe Shyam is an ill-formed love story that is hard to fall in love with. If the devil is in the details, he is everywhere in this film, which seems to be out to prove that the line between blockbuster and lacklustre is precariously thin.

Samantha Ruth Prabhu Pens A Long Note After Being Trolled For Her Dress: "Focus On Bettering Ourselves"