Race 3 Stunts Were Not As Easy As Salman Khan Makes Them Look. For Example...

Talking about a Race 3 action scene, Remo D'Souza said: "It sees Salman riding a bike at high speed, only to navigate a falling tree" 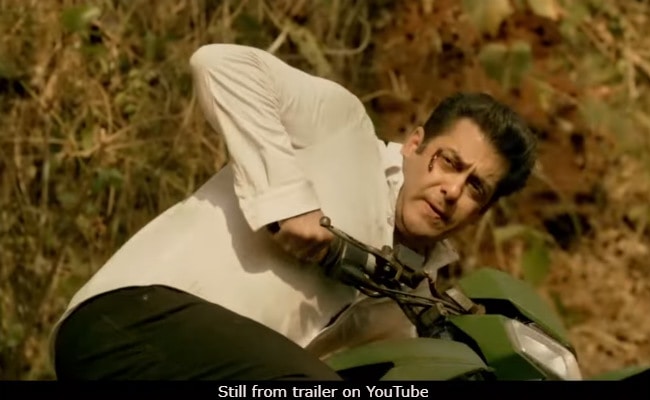 Salman Khan in a still from Race 3 trailer (courtesy YouTube)

New Delhi: The wait is almost over. The wait for Race 3, we mean. And before you hit the theatres, how would you like some trivia about the action and chase sequences in the film? You're welcome. So, you must have seen Salman Khan dodge a huge tree as he glides his way on a bike from under its large trunk? It was not as easy as Salman makes it look in the trailer, director Remo D'Souza told mid-day. Talking about a similar sequence, in which a tree crashes after Salman's bike stunt, Remo told mid-day: "Since the tree had to crash a few feet behind Salman, we took five days to synchronise it before the shoot. It was being held atop by crew members till Salman rode his bike beneath it. Since one cannot predict how fast a tree will fall, a lot depended on his timing."

This particular sequence is one of Remo's "favourite" ones and has been shot in the jungles of Bangkok's Kanchanaburi - the other one being the climax, which involves a "hand-to-hand combat." This is what he told mid-day: "While every stunt is dangerous, breathtaking and expensive, two of them are my favourites. The first is the climax scene, which involves hand-to-hand-combat, and the second is one we shot in Bangkok's Kanchanaburi jungles. It sees Salman riding a bike at high speed, only to navigate a falling tree."

Not just in the action sequences but Salman's introductory scene in the movie has also been planned on a large scale. In a statement earlier, the director, who is a huge fan of Salman Khan, said: "The biggest vision while directing Race 3 was to represent Salman Khan like never before! I am a huge fan of Salman and I know how audiences would want to see him on the big screen. Hence I personally planned on giving Salman a larger than life entry sequence in the movie."

If all of this is making the wait for Race 3 difficult, you can take a look at the trailer till you witness all the action on the big screen.

Race 3 is being headlined by Salman Khan, the cast of which also features Anil Kapoor, Jacqueline Fernandez, Daisy Shah, Saqib Saleem, Bobby Deol and Freddy Daruwala. Race 3 is all set to hit the screens this Friday.