Put Your Shades On For Khushi Kapoor's Pool Day Glow-Up 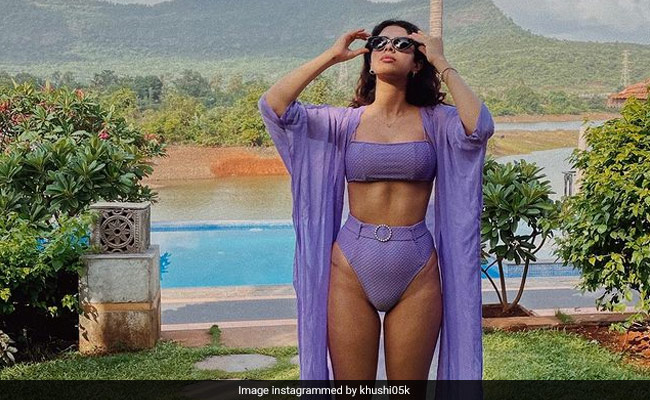 Khushi Kapoor loves herself a good photoshoot. Well, who doesn't. Janhvi Kapoor's sister Khushi began the weekend by making a splash on Instagram. Khushi, who appears to be on a getaway somewhere in the hills, spent all of Friday soaking up the sun and chilling in the pool. Some of her thank-god-it's-Friday moments made it to her Instagram and TBH, they are pretty envy inducing. "Pool day," Khushi Kapoor captioned her postcard like entries, in which she can be seen getting a good dose of vitamin D by the pool. In the photos, Khushi looks cute as a button in a lilac bikini with a matching shrug. She accessorised with some sleek pieces of statement jewelley and retro sunglasses. Khushi Kapoor's photos are proof that every body is a bikini body.

Khushi Kapoor's friends, who are always cheering for her on Instagram, were the first ones to drop adorable comments. "Cute," wrote Navya Naveli Nanda while Shanaya Kapoor said: "Girl, you're on fire." Earlier, Khushi Kapoor gave off major tropical vibes with this sun-kissed selfie of her peachy glow-up.

Khushi Kapoor is part of Bollywood's gen-next circle, also comprising Suhana Khan, Ananya Panday, Shanaya Kapoor and Navya Naveli Nanda. Khushi Kapoor is the daughter of filmmaker Boney Kapoor and late actress Sridevi. Khushi aspires to be an actress and studies at the New York Film Academy. Her sister Janhvi Kapoor is an actress, who has starred in films such as Dhadak and Roohi.