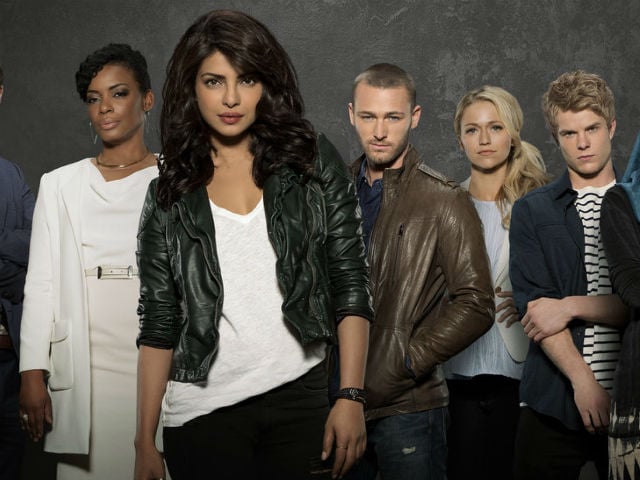 A poster of Quantico

New Delhi: It's not just the fans world-wide, even her Quantico team is left enthralled by Priyanka Chopra's flawless acting skills and killer looks.

In a recent eighteen-minute long behind-the-scenes video, her co-stars opened up about how impressed they are with the 34-year-old Bollywood actress.

Show-creator Joshua Safran, while recalling the audition day and Priyanka's impression on him, said, "When she auditioned, she walked in the door and we're like okay 'who is this?'. We're like this is clearly a movie star; it's like every hair on the back of your neck stands up watching her act. When I went back home I couldn't think about anyone else. It wasn't even like I was thinking Priyanka has to play this, she had actually re-envisioned the character from my eyes."

Jake McLaughlin, the actor playing Ryan in the show said, "I didn't know anything about Priyanka, so I didn't know who she really was or anything like that, until later that I realized the extent of her celebrity because she is a down to earth girl."

Hollywood actor Josh Hopkins, playing the role of a seasoned FBI agent also vouched for the passion the Mary Kom actress possesses for her job.

"I think Priyanka is beautiful, she is a great actress, she just shines, she has got that 'it' factor. She walks into a room and everyone turns and looks and she just lights up, she is a tireless worker and is an example. I mean we all got tired it was a long season and she was always chipper and ready to go and she had to work more hours then everyone but she never complained and set the term for everybody," he said.

Her co-star Aunjanue Ellis, while speaking about Priyanka's involvement in the show, said, "What I like is getting the opportunity to see Priyanka as the leader of this cast and how she works is so hard and the way she does. She takes what she does incredibly seriously and she brings certain amount of joy to it."

The second season of the American thriller series, Quantico will start airing on September 25.

On a related note, thanks to Quantico, Priyanka has made it to the Forbes' list of the world's highest paid actresses.

Promoted
Listen to the latest songs, only on JioSaavn.com
She has secured the eighth position, beating veteran actresses like Julia Louis-Dreyfus, Julie Bowen and Zooey Deschanel on the list.